It’s official, the Mesalands Community College Men’s Rodeo Team clinched the Grand Canyon Regional Championship title, for the second consecutive year, at the rodeo at New Mexico State University (NMSU) in Las Cruces, NM last weekend. The Women’s Team also had their best year, finishing second in the region with 3,801.50 points. The Men’s Team recently broke their own National Intercollegiate Rodeo Association (NIRA) record this season, by earning 1,357.5 points in Crownpoint, the most points earned at a single rodeo. The Men’s Team has done it again and set another national record for the most points earned during a single season, with a total of 9,707.5 points earned this season.“We beat the record close to 1,000 points. The national office is still auditing the points, but going into the last rodeo we only needed 7.5 points to beat the national record,” C.J. Aragon, Intercollegiate Rodeo Coach at Mesalands said.

Last year was the first time in the program’s history, that the College won a regional championship title, ending NMSU’s eight-year winning streak. Winning the regional title two-years in a row demonstrates how remarkable the Mesalands Rodeo Team has performed and improved over the years.

“It’s pretty nice to be able to defend our Team title. Many people might have thought we were just lucky last year, but after winning two years in a row in a pretty convincing fashion, it legitimizes our Team and our rankings as the current number one team in the nation,” Aragon said.

Last weekend, Fuller took the championship title in the team roping, heading for fellow teammate Daniel Munoz-Boezi from Chihuahua, Mexico. Fuller also finished second in the Women’s All-Around, and fifth in the barrel racing. As the top female rodeo recruit last year, Fuller has performed as expected this season.

Fuller finished first in the region in the Women’s All-Around, second in goat tying, third in breakaway roping, fourth in the team roping (header), event and eighth in barrel racing.

“It’s difficult because I ride four horses and I have six horses here that I have to keep in shape. It’s especially hard to focus when your mind is racing around about team roping, breakaway, goat tying, and then turn around and get on a barrel horse. You just have to stay focused,” Fuller said. “I feel pretty good about my performance this spring.  In the fall I didn’t really have any points in any events, so I had to make those up this semester. This year has been a great experience.”

Nationally, Fuller is currently ranked first in the Women’s All-Around, 10th in goat tying, and 20th in the breakaway event.

Freshman Jordan Minor of Navasota, TX also shined this season finishing first in the region in the tie down roping. Minor is currently ranked 15th in the nation in tie down roping.

Other individual regional year-end standings include: 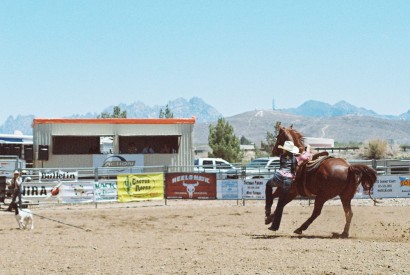 Macy Fuller a Rodeo Student at Mesalands, recently took the championship title in the team roping header event at the rodeo at NMSU last weekend. 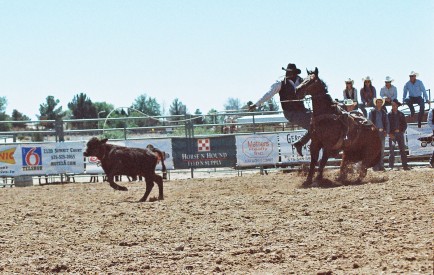 Mesalands Rodeo Student Jordan Minor of Navasota, TX finished first in tie down roping in the Grand Canyon Region. He is also currently ranked 15th in the nation.