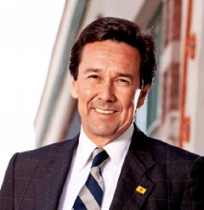 Mesalands Community College is pleased to announce that Jon Barela, Cabinet Secretary for the New Mexico Economic Development Department, will deliver the 2012 commencement speech. The ceremony will be held on Friday, May 6, 2012 at 6 pm at the Tucumcari Convention Center.

Barela is a native New Mexican, small businessman and an active leader in the state for more than 25 years. Barela graduated from Georgetown University’s School of Foreign Service in Washington, D.C. with a bachelor’s degree in history and diplomacy and earned his law degree from Georgetown.

Barela began his career in public service as a senior aide to the late New Mexico Congressman Joe Skeen. In 1987, he returned to New Mexico and joined the Modrall Law Firm. Four years later he became New Mexico’s Assistant Attorney General and Director of the Civil Division. In this role, he led unprecedented efforts to enforce and educate the public about New Mexico’s open meetings and public records laws. In 1993, Barela joined Intel, one of New Mexico’s largest private employers, as its community and government affairs manager. He set company benchmarks for outreach into underrepresented communities and was awarded the Intel Achievement Award, the company’s highest and most selective honor.

“Cabinet Secretary, Jon Barela has had a positive impact on economic development for the State of New Mexico, and is a strong advocate for what education can do to improve and enhance the future of our state,” Dr. Mildred Lovato, President of Mesalands said. “I believe his knowledge and experience will contribute to the future success of our graduates.”

Since 2002, Barela has been a partner in several business ventures. He has served on numerous non-profit boards of directors and committees and is passionate about making New Mexico a better place to live and work. He has made competitiveness and improving education central themes in his chairmanship of several significant organizations. Barela is committed to making New Mexico a place where business and government can work together to create an environment that promotes a vibrant and healthy job market and economy.