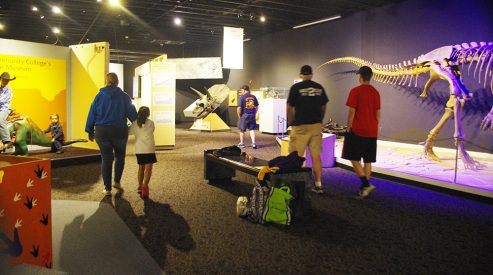 Visitors at the Mesalands Dinosaur Museum and Natural Sciences Laboratory

The 2016-2017 Annual Report for the Mesalands Community College’s Dinosaur Museum and Natural Sciences Laboratory, shows the Museum had a total of 13,042 visitors last year from across the nation and 45 foreign countries. The Museum also had an 8 percent increase in the number of foreign visitors last year.

Exhibits
The new exhibit entitled: “Life in Time” was unveiled last year. This exhibit showcases the history of sea life. The “Mesalands Student Discovery” and the “Lost-wax Method of Casting” exhibits were also updated.

Volunteers
The Annual Report also highlighted Museum volunteers.  Volunteers logged over 200 hours last year. Many of these hours went to building  improvements; including painting the inside and outside of the Museum and updating the lighting in the exhibit hall.