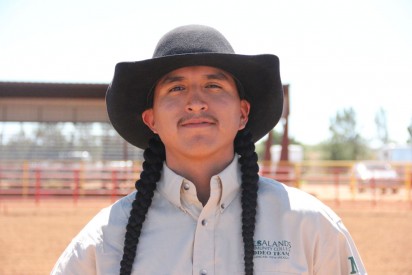 Sophomore Edmiles Harvey of Tsalini Springs, AZ, is the first member of the Mesalands Community College Rodeo Team to clinch his ticket to the College National Finals Rodeo, June 15-21, 2014.

Sophomore Edmiles Harvey of Tsalini Springs, AZ, is the first member of the Mesalands Rodeo Team to clinch his ticket to the CNFR. He currently has a 460-point lead over the fourth place cowboy and with only 325 points available, Harvey will definitely be competing at the college finals. He is still working on securing the reserve regional title in this event.

“Window Rock was a solid rodeo for us,” said Tim Abbott, Interim Intercollegiate Rodeo Coach at Mesalands. “We also have several student athletes that are qualifying at this point to compete at the college finals.”

Moore made the short round in all three of his events, tie-down roping, team roping, and in steer wrestling. His run in the steer wrestling event did not go as expected and he finished the average in sixth place with a time of 16.4 seconds. However, Moore and Rusty Van Solen (header) from New Mexico State University, electrified the team roping event and won the average with a time of 16.8 seconds. Moore also placed third in the average in the Men’s All-Around event with 225 points. Moore is fighting for his ticket to the CNFR and after his performance at the Navajo Technical University Rodeo, he has a legitimate chance to win that golden ticket.

The Mesalands Rodeo Team will compete in their last two rodeos of the season at New Mexico State University in Las Cruces, NM, April 25-27, 2014.