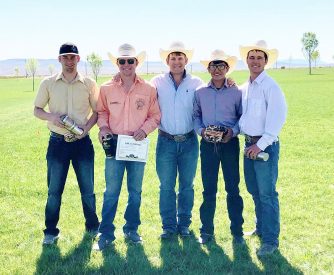 “We definitely did better this semester. This time, the Men’s Team ended the season third and only a few hundred points from second,” said Matt Hughes, Intercollegiate Rodeo Coach and Faculty Member at Mesalands. “We are continuously getting better and the overall the program is going in the right direction.”

For the first time in the program’s history, the Mesalands Rodeo Team will be sending three bull riders to the college finals.

Hiyo Yazzie of Brimhall, NM, won the long round in the tie down roping event at the rodeo. He was second in the long round in team roping. Also at the rodeo, Yazzie was awarded Rookie of the Year and his horse won Horse of the Year. In the year-end regional standings, Yazzie placed fifth in team roping, 10th in tie down roping, and 10th in steer wrestling. Steer wrestler Chance Wilson of Hope, NM, was fifth at the rodeo and 15th in the year-end standings.

Team ropers David Martinez of Anton Chico, NM and Taylor Strohl of Clovis, CA finished in the top 10 at the rodeo. Also in team roping, Michael Lucero placed ninth in the year-end standings.