Bull rider Levi Gray from Dairy, OR, took second place at the Mesalands Fall Rodeo. On Friday night, Gray struggled and received a no score. On Saturday, he was the final competitor and had an electrifying eight-second ride. His performance was an exciting way to end the rodeo.

“I had a bit of a rough go the first night, but you can’t ever predict bulls, so you have to expect the unexpected,” Gray said. “Bull riding went well, but we’ve spent a lot of weeks planning and getting this rodeo ready. It was really nice that our whole team worked together and everything went smoothly. Overall, it was just a really great night!”

Gray will end the fall season, first place in the Grand Canyon Region with a total of 240 points.

Fellow teammate Hiyo Yazzie from Brimhall, NM, also had a good showing at the Mesalands Fall Rodeo. Yazzie qualified for the championship round in three different events, including: team roping, tie down roping, and steer wrestling. He finished third in the Men’s All-Around with 150 points. In team roping (heeler) he was fourth with Erik Becenti from Navajo Technical College. In tie down roping, he finished in fifth place with 26.5 points. Yazzie took ninth place in steer wrestling.

For the Women’s Team, Rebecca Darrup from Mifflinburg, PA and Delaney Gonzales from Grants, NM finished the short round in the goat tying event, in 11th and 12th place.

Matt Hughes, Intercollegiate Rodeo Coach and Faculty Member at Mesalands, says he was very pleased on how the fall season turned out.

“The whole reason I’m here is because I like to see students get better,” Coach Hughes said. “We’ve had a successful year so far and we still have a lot of the season left. The way I see it, if we do the work we ought to do and if we put in the hours, at the end of the year, we will be sitting where we deserve to be sitting.”

The Mesalands Fall Rodeo was the final rodeo of the fall season. The Mesalands Rodeo Team will begin the spring season in March. 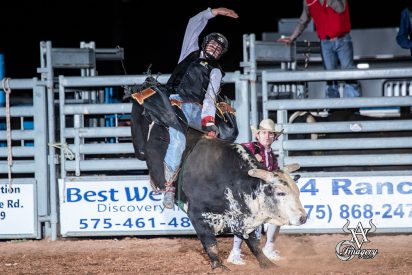