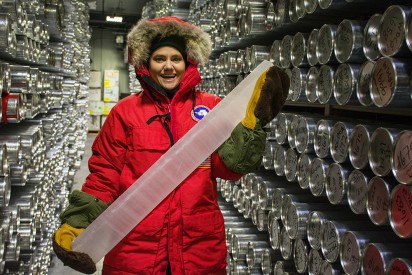 Gretchen Gürtler, Director of the Mesalands Community College’s Dinosaur Museum and Natural Sciences Laboratory and Part-Time Instructor at Mesalands Community College, recently participated in the U.S. Ice Drilling Program to study the role that ice cores play in paleo-climate science. Gürtler was one of 12 college staff members in the nation, selected to participate in this research project that was conducted at the U.S. National Ice Core Laboratory (NICL) in Denver, CO.

According to their website, the NICL is a National Science Foundation (NSF) facility used for storing, curating, and studying meteoric ice cores recovered from Antarctica, Greenland, and North America. The NICL stores over 17,000 meters of ice core samples. The ice core samples are stored in various freezers held at -40° at the NICL. Climate scientists conduct a variety of scientific investigations on the ice core samples, to better understand the Earth’s climate state during that time. As a result, this research should assist climate scientists in modeling future climate changes.

“I am fortunate to have had the opportunity to take part in such a vital research project, that could be used to predict future changes to our climate,” Gürtler said. “I am anxious to share what I have learned with students enrolled in Environmental Science, Meteorology, and Global Climate Change courses at Mesalands Community College.”

Gürtler says students enrolled in this courses will conduct water experiments utilizing some of the water samples from polar regions and ice core data provided by the Institute of Arctic and Alpine Research (INSTAAR) at the University of Colorado at Boulder and from the American Meteorological Society.

Gürtler also wanted to thank NSF and Lockheed Martin for making it possible for her to participate in this once in a lifetime opportunity.

Picture courtesy of Ernie May of the Antarctic Sun.