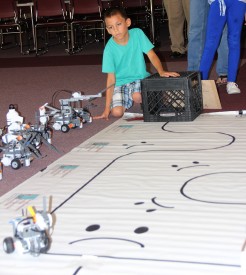 Taylor Enriquez shows the capabilities of the robot he developed during the Robotics Academy at Mesalands Community College.

Last week, the Robotics Club at Mesalands Community College, hosted a Robots and Rockets Summer Camp Academy, in conjunction with RoboRAVE (Robots Are Very Educational) International in Albuquerque, NM and Inquiry Facilitators, Inc., located in Bernalillo, NM. According to the Inquiry Facilitators website, the mission of this non-profit organization is to enhance science, technology, engineering, and mathematics (STEM) education through academic competition, support of student research, and professional development for teachers. The week-long Robotics Academy, at Mesalands provided students with additional training on how to design and program autonomous robots and computer games. The academy also helped to prepare the members of the Robotics Club for the 2017 RoboRAVE competition.

“The main focus of this academy is STEM education. We want young boys and girls excited about technology and science. With this Robot Academy and the RoboRAVE competitions, we can help foster that interest,” said Brian Montoya, Director of RoboRAVE International at Inquiry Facilitators, Inc. and the instructor of the Robotics Academy. “I really enjoyed working with the students at Mesalands Community College this week. I hope we can partner with Mesalands more in the future.” 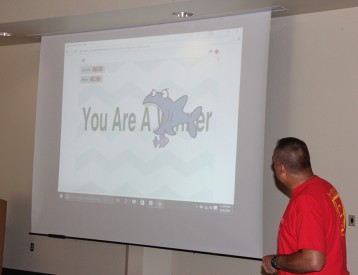 Brian Montoya, Director of RoboRAVE International at Inquiry Facilitators, Inc. and the instructor of the Robotics Academy, explains how Enriquez used source code to develop the game of the shark, attempting to eat the fish.

For the last day of the Robotics Academy, students had the opportunity to present their projects during a special Robotics Presentation. Parents and Mesalands staff members attended the event. The students revealed the computer games and robots they developed using source code. Taylor Enriquez, 6, was the youngest participant Montoya has had in this academy. Enriquez was the first student to present his computer game he created of a shark trying to eat to fish, within a certain timeframe. He also showed the capabilities of the robot he programmed during the second part of the presentation.

“My favorite part was working with the robots. It was fun!” Enriquez said.

The Robotics Club at Mesalands Community College, plans to attend their second RoboRAVE International Competition in Albuquerque in May 2017.