Jill Cohn will be performing during the Henry Gonzales Memorial Art Exhibition and Slideshow on Tuesday, March 7  at 6:30 pm in the Great Room. 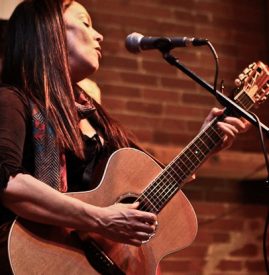 Radio Station recently called a concert with Jill Cohn “an evening of Folk Americana Bliss” and her Soul-Stirring Voice in combination with lush arrangements, toe tapping road songs and heart-string tugging ballads had the Los Feliz Journal (Los Angeles, CA) naming her album a 2012 top 10 indie pick. Cohn returns in 2017 in support of a new release, “Heartstrings Touching Ground” produced by Grammy Award Winning Producer Malcolm Burn, who has credits with Bob Dylan, Daniel Lanois and is best known for his production on “Red Dirt Girl”, by EmmyLou Harris. After hearing Jill’s song, “Yellow Rose” which is about the struggles of the common man against corporate America, Burns invited the Seattle Songstress to record with him in his Kingston NY studio.  This collaboration has resulted in a stunning new collection of deeply personal songs with a universal message of hope.