During last month’s Board of Trustees Meeting, Gretchen Gürtler, Director of the Mesalands Community College’s Dinosaur Museum and Natural Sciences Laboratory, presented the Museum’s 2015-2016 Annual Report. According to the report, there were a total of 13,863 visitors to the Museum last year, an increase of nearly 14 percent. These visitors were from all over the U.S. and 45 foreign countries. Sales for the Museum Gift Shop also showed an increase of approximately 10 percent.

Gürtler states that the increase attendance to the Mesalands Dinosaur Museum, reflects the eight percent increase in tourism and sales across the State, according to New Mexico State Tourism and Travel. 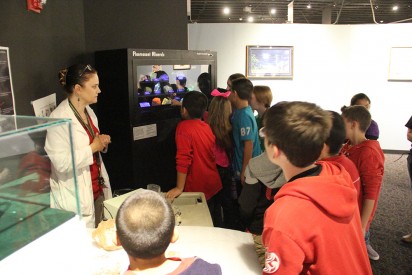 Gürtler said there are many reasons for this increase in attendance and sales at the Dinosaur Museum.

“The increase can be attributed to the drastic drop in gasoline prices. We also have new billboards promoting the Museum on I-40, which helped with advertising,” Gürtler said. “In addition, we have a presence on social media and are participating in Pokemon Go.”

She also stated that most visitors come from Route 66 traffic and Interstate 40. Recently, the Mesalands Dinosaur Museum was included in the Travel Channel’s “21 Family Must-Stops Along Route 66.” The Dinosaur Museum was ranked 10th in the list, behind the Cadillac Ranch near Amarillo, TX.