After competing in the final two rodeos of the season at New Mexico State University (NMSU) in Las Cruces, NM, the Mesalands Women’s Team are the new 2013 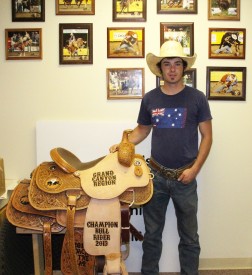 Grand Canyon Regional Champions, for the first time in the program’s history. The Women’s Team finished the year-end with 3,520.50 points and is currently fifth in the nation. The Men’s Team took third place in the year-end standings with 3,741 points.

“The Women’s Team did outstanding all year! All of the Women had a great year, including Macy Fuller, Shelby Rita, and Betty Jo Pack,” said C.J. Aragon, Mesalands Intercollegiate Rodeo Coach. “On the Men’s Team we had some guys battling injuries this season, and we were pretty close to sending two more guys to nationals. Overall, we have a really good group going to the college finals.”

Sophomore Macy Fuller of Wittman, AZ has secured her ticket to the College National Finals Rodeo (CNFR). Fuller finished first in the regional year-end standings in the Women’s All-Around, in goat tying, breakaway roping and took eighth in barrel racing. Fuller is leading the nation in the Women’s All-Around and in goat tying. She is currently second in the nation in breakaway roping. Fuller will be competing in all three events at the CNFR.

Sophomore Shelby Rita, of Sunset Beach, HI will also have another chance to compete at the CNFR. Rita took second in breakaway roping and 12th in barrel racing in the year-end regional standings. Rita is also currently sixth in the nation in breakaway roping.

Freshman Betty Jo Pack, from Aztec, NM will be the third member of the Women’s Team competing at nationals in breakaway roping. Pack finished sixth in the year-end regional standings.

Sophomore Cody Heffernan of Singleton, Australia had an outstanding season in bull riding this year. He took first place in the region in the year-end standings, and is currently first in the nation. Mesalands took all three qualifying spots for nationals in bull riding. Heffernan, sophomore Kody Decker of Viola, KS, and freshman David Gonzalez of Chihuahua, Mexico will be representing the Grand Canyon Region at the CNFR.

“I’m very confident that I’m going to do well at nationals,” Heffernan said. “I think I was more relaxed this year and getting used to the bulls over here. The bulls here are faster and stronger. After the national finals and I win in the bull riding, then we can say I’m best in the nation!”

In steer wrestling, freshman Michael McGinn took second place in the year-end regional standings and earned his ticket to nationals this year. McGinn is eighth in the nation.

Sophomore Christian Stremler of Winnemucca, NV will be competing at the CNFR for the second time in saddle bronc riding. Stremler took second in the year-end regional standings and is currently 19th in the nation.

Lastly, Jordan Minor of Navasota, TX will once again be competing at nationals in tie-down roping. Minor won the final national qualifier for this event finishing third in the regional standings.

Other year-end regional standings include:

The Mesalands Rodeo Team will be sending ten team members to the CNFR in Casper, WY, June 9-15, 2013.