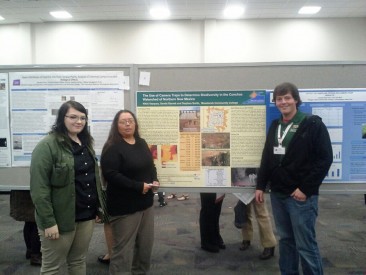 Three students from Mesalands Community College recently presented at the Community College Undergraduate Initiative (CCURI) Fall 2014 Colloquium co-hosted with Bio-Link at Gaston College in Charlotte, NC. This event was funded by the National Science Foundation’s (NSF) Advanced Technological Education program that focuses on improving the education of technicians, who work in advanced technology industries that are important to the nation’s economy and security.

‘’It’s nice that our students have the opportunity to participate in quality biological research projects,” Gretchen Gürtler, Director of the Mesalands Community College’s Dinosaur Museum and Natural Sciences Laboratory. “Some people learn by doing and others learn by teaching. When our students attend events such as the colloquium, they are not only learning by teaching others, they also learn from other students and college professors, who are working on similar research projects.”

Forty-two students from across the nation participated in this Fall 2014 Colloquium. Student research projects focused on biology, biotechnology, biochemistry, and genetics. Mesalands Community College students Nikki Vazquez, Sanda Garrett and Stephen Smith presented their research on “The Use of Camera Tracks to Determine Biodiversity in the Conchas Watershed of Northern New Mexico.” With the assistance of the Albuquerque District of the U.S. Army Corps of Engineers, Mesalands students deployed camera traps near Conchas Dam. The data collected from the camera traps, showed that the enhanced availability of water and vegetation, resulted in the return of deer and other wildlife. They also found that many offspring survived to maturity. 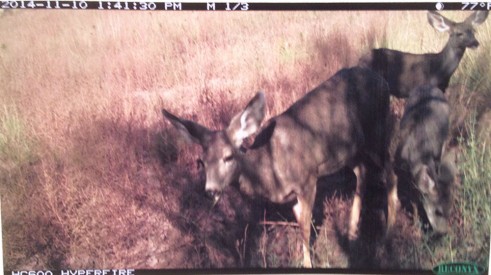 Several doe were observed at both camera trap locations.

“We presented our research on the fact that now we have more precipitation in the area, we are getting more animals grazing and they are having more babies. In many cases, the mammals are also having additional pregnancies this year,” Vazquez said. “Our presentation went very well and the event was so much fun. The best part of the trip was meeting new people and learning more about their research projects, using camera traps.”

“Mesalands has opened the door of opportunity for me that I didn’t think was possible and I just want to tell them thank you,” Vazquez said.

Gürtler stated that they will continue to utilize the camera traps for their ongoing watershed research project. She also wanted to thank the following organizations, for their assistance with the undergraduate research projects at Mesalands: Albuquerque District of the U.S. Army Corps of Engineers, CCURI, Mesalands Community College Foundation, Inc., Natural Resource Conservation Service, NM EPSCoR, NSF, the Science, Technology, Engineering, and Mathematics Department at Mesalands Community College, and the WC-WAVE.