The Mesalands Rodeo Team will have students from two foreign countries and seven U.S. states at the College National Finals Rodeo

The Mesalands Community College’s Rodeo Team finished the season strong this year. The Women’s Team brought home the 2013 Grand Canyon Regional Championship Title and are fifth in the nation in the year-end standings. The Women’s Team also has the number one female in the nation in the Women’s All-Around. The Men’s Team has the top bull rider in the nation and four other team members ranked nationally. The Mesalands Rodeo Team is ready to compete in the biggest college rodeo competition of the year, the College National Finals Rodeo (CNFR) in Casper, Wyoming, June 9-15, 2013. 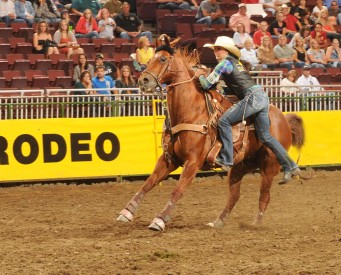 “We are sending a more experienced group to nationals this year. They are a pretty veteran group, even though they are pretty young. That makes it nice as far as getting students prepared. They know what they need to do to compete well at nationals,” Coach C. J. Aragon, Intercollegiate Rodeo Coach at Mesalands said. “I haven’t verified with the national office, but I think we are probably one of the only colleges sending multiple nationalities to the college finals—we are sending students from Australia, Mexico, and from all over the U.S. We have a pretty diversified group going up there.”

The Mesalands Rodeo Team will have 10 members competing at the 2013 CNFR, representing two foreign countries and seven U.S. states.

Macy Fuller of Wittman, AZ has secured her ticket to the CNFR for the second consecutive year. Last year, Fuller was named the 2012 CNFR Rookie of the Year and finished second in the nation in goat tying. Fuller is currently first in the nation in the Women’s All-Around, second in goat tying, and third in breakaway roping in the year-end standings. Fuller will be competing in all three events at the 2013 CNFR.

Bull rider Cody Heffernan, from Singleton, Australia was the 2013 Grand Canyon Regional Champion Bull Rider. He is also first in the nation in the year-end standings. Heffernan earned his ticket to the CNFR and will be joined by two other members from his Team. Kody Decker of Viola, KS is 16th in the nation in the year-end standings, and will be competing at nationals for the first time with teammate David Gonzalez of Chihuahua, Mexico.

Other 2013 CNFR qualifiers include:

Tie Down Roping: Jordan Minor of Navasota, TX will be competing at nationals for the second consecutive year. Minor finished 26th in the nation at the 2012 CNFR.

Breakaway Roping: Shelby Rita, of Sunset Beach, HI took 13th in barrel racing at last year’s CNFR. Rita is seventh in the nation in breakaway roping in the year-end standings.

Saddle Bronc Riding: Christian Stremler of Winnemucca, NV will be competing at the CNFR for the second time in saddle bronc riding. At last year’s CNFR Stremler finished 19th in the nation. He is currently 24th in the nation in the year-end standings.

Steer Wrestling: Mike McGinn is ninth in the nation in the year-end standings. He earned his ticket to compete in steer wrestling at nationals for the first time. He also has experience competing at the National High School Finals.

Team Roping: Morgan McVay of Reno, NV is currently 16th in the national year-end standings. McVay will be competing in team roping (heeler) with Victor Ugalde from New Mexico State University at the 2013 CNFR. McVay was the 2012 High School National Champion (heeler).