TUCUMCARI, NM- The Mesalands Community College Rodeo Team recently had two competitions in Arizona, one at the University of Arizona in Tucson and another at Navajo Technical College in Window Rock. The Men’s Team brought home some individual championship titles and now has one qualifier for the College National Finals Rodeo (CNFR), with two more rodeos remaining. The Mesalands Rodeo Team will be hosting their Grand Canyon Intercollegiate Spring Rodeo this weekend at the Quay County Fairgrounds. 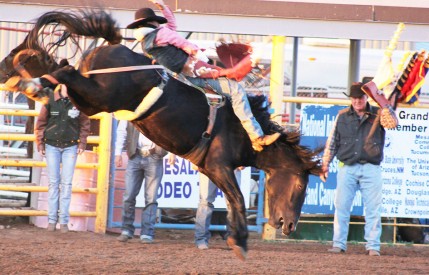 “Tucson was another solid rodeo for us, obviously in a one header you get one chance to compete. It’s all or nothing, no second chances,” said Tim Abbott, Interim Intercollegiate Rodeo Coach at Mesalands.

Sophomore Jake Carr of Saratoga Springs, NY brought home the championship title in bull riding at the University of Arizona rodeo with 77 points. Carr was the only bull rider that had a qualified ride at the rodeo.

Freshman Chace Valdez of Estancia, NM took sixth in tie down roping. Valdez did not draw a very good calf, but he persisted and earned some points during the rodeo. Valdez  is still leading the region in this event and will most likely secure his CNFR qualification.

Team ropers freshman Chance Hunter (header) and freshman Sam Tyler (heeler) both from Chinle, AZ, have consistently competed well this season. They were third at the rodeo with a time of 8.2 seconds.

The Mesalands Men’s Team finished third at the University of Arizona rodeo with 497 points.

“We had a fantastic rough stock rodeo at Navajo Technical College. In the long rounds, all five of our rough stock contestants made qualified rides,” said Coach Abbott.

Sophomore Devyn Sisneros of Santa Rosa, NM brought home the saddle bronc riding championship title. Sisneros won first in the long round, second in the short round, and first in the average.

This will be Harvey’s second consecutive qualification to the CNFR.

In bull riding, Jake Carr and freshman Kasy Baker of Cottonwood, CA, split for third and fourth place in the average. Sophomore Adriano Long of Dilkon, AZ took fifth in the average in steer wrestling.

Freshman Chance Stucker of Orville, WA, had a strong performance at Window Rock. He was fourth in the long round, second in the short round, and finished second in the average.

For the Women’s Team, sophomore Betty Pack of Aztec, NM won fourth in the short round and fourth in the average. Pack is making a run for her third CNFR qualification.

The Men’s Team ended the  Navajo Technical College rodeo in third place and the Women’s Team in sixth place.

“We have our Mesalands Spring Rodeo coming up and I expect to win it again!” Coach Abbott said. “When we perform to our full potential, there is no other team in the region that’s any better than us and we are ready.”

The Mesalands Spring Rodeo is April 17-18, 2015 at the Quay County Fairgrounds.

Below are the Grand Canyon Region Standings:
The top three in each event qualify for the college finals.