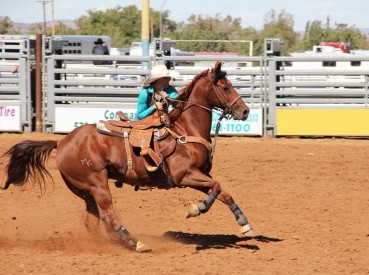 The 5th Annual Mesalands Community College Rodeo for the Grand Canyon Region was last weekend at the Quay County Rodeo Arena. This year there were more spectators, more competitors, and special guests at the rodeo.

David Gonzalez of Chihuahua, Mexico was not only excited about clinching his first championship title in bull riding last weekend, but the fact that his parents were there to share in his excitement.

“I think it was a good rodeo. I have no words to explain how it felt to have my family from Mexico there at the rodeo. I’m just so happy!” Gonzalez said. 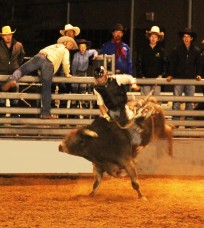 Teammates Chaz Kananen from Roy, MT, and Daniel Robertson from Huntland, TN, brought home the Team Roping Championship title finishing the average in 18.3 seconds. The Men’s Team had one of their best rodeos in team roping last weekend. Luis Delgado from Chihuahua, Mexico and Preston McCullar from New Mexico Highlands University finished the average in second place in 20.4 seconds.

The Women’s Team took second place at the rodeo. Macy Fuller of Clarkston, WA took second in the average finishing in 16.6 seconds in goat tying, close behind the title winner with 16.3 seconds. Betty Pack of Aztec, NM finished the average in 5.1 seconds taking second in breakaway roping and Shelby Rita of Sunset Beach, HI came in fifth place with 3.1 seconds.

“We had four girls place, which is the most we’ve had all year. Our Women’s Team is truly coming together,” C.J. Aragon, Mesalands Intercollegiate Rodeo Coach said. “We had a good turnout at the rodeo. Good community support. I was also excited to see Roger at the rodeo. It’s nice to get input and suggestions from him and have him see our College and our facilities.”

On Saturday Coach Aragon and Dr. Mildred Lovato, President of Mesalands, presented Roger Walters, National Intercollegiate Rodeo Association (NIRA) Commissioner with a gift to show their appreciation for him attending the Mesalands Rodeo. 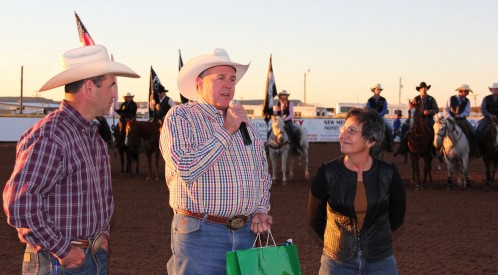 Walters oversees 142 colleges nationwide with intercollegiate rodeo programs and 50 independent colleges. He says he was impressed by the integrity of the Mesalands Rodeo Program and the hard work and dedication of Coach Aragon.

“Coach Aragon’s attitude, work ethic, his ability to communicate with others, and his concern for his student athletes says a lot about the integrity of this program. You don’t get a coach better than that,” Walters said. “I was lucky enough when he was named Coach of the Year to be able to present that buckle to him. And to listen to what all of his students said about him. I’m telling you they don’t give those accolades for nothing.”

Kindergartners from Tucumcari Elementary School led the crowd in the Pledge of Alliance on Friday and Saturday. They also participated in a dance with College’s new mascot “Stampede.”

“How amazing it was to see so many athletes and supporters at the Mesalands Rodeo last weekend,” Dr. Lovato said. “Thanks to the Tucumcari Rotary Club for the wonderful job they did at the concession and thanks to the Tucumcari kindergartners for their help at the rodeo. They made this event very special.”

Other individual standings at the Mesalands Rodeo included: