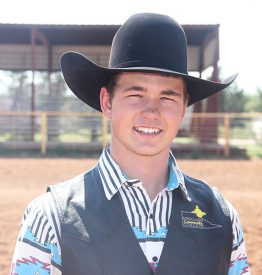 Caption. Levi Gray from Dairy, OR, and a member of the Mesalands Rodeo Team will be competing at the College National Finals Rodeo.

The Mesalands Community College Rodeo Team ended the spring season with a qualifier for the biggest college rodeo event of the year, the 2018 College National Finals Rodeo (CNFR). Bull rider Levi Gray from Dairy, OR, has earned his ticket to the college finals.

“I feel very blessed to have this opportunity and I love it down here,” Gray said. “I enjoy being on the rodeo team. It’s very positive and encouraging. It becomes more of a family than a team.”

Gray said he will be preparing for the upcoming CNFR with Matt Hughes, Intercollegiate Rodeo Coach and Faculty Member at Mesalands. He plans to stay in Tucumcari to train in the gym and to work on his fundamentals with Coach Hughes, until the college finals.

The Mesalands Rodeo Team had some challenges this season with multiple student athletes suffering from injuries.

“Since the Mesalands Rodeo in October, I have basically been competing with four athletes on the Men’s Team, out of a possible six. We were still competing against some of the biggest teams in the nation,” said Coach Hughes. “To be able to accomplish what we did this season with all of the injuries, it’s still pretty amazing! I’m proud of both our Men’s and Women’s Teams.”

The Men’s Team was fifth and the Women’s Team placed sixth in the regional year-end standings. 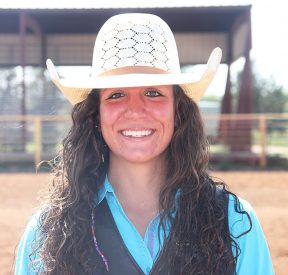 Rebecca Darrup from Mifflinburg, PA, and a member of the Mesalands  Rodeo Team, has a good showing at the last few rodeos of the season.

Results from the recent rodeo competitions:

Rebecca Darrup from Mifflinburg, PA placed fifth in goat tying in the long round

Darrup tied for eighth place in Breakaway Roping. She had a time of 3.3 in the long round. This brought her back in the top five in the short round.

“This year we definitely spent a lot of time building up the program. The structure that we want is there, we just have to continue taking it to the next level,” said Coach Hughes. “With the recruits we have coming in and many returners next year, I have very high hopes for the Mesalands Rodeo Team next year.”