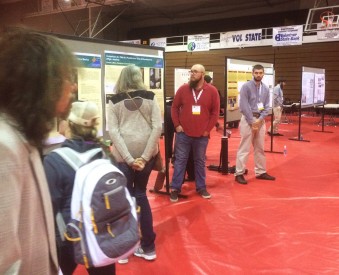 “At Mesalands Community College, students have the opportunity to do intensive and self-directed research that results in an original scholarly poster that can be formally presented at research forums,” said Gretchen Gurtler, Director of the Mesalands Community College’s Dinosaur Museum and Natural Sciences Laboratory. “When are students attend events such as the colloquium, they also get to network with other students and college professors that are involved in undergraduate research.”

The students presented research on the following: ‘Petrified Wood of the Trujillo Formation in Eastern New Mexico’ by Janelle Hansen; “Sacra of a Shuvosaurid from the Late Triassic of New Mexico’ by Patricia Hansen; and ‘Comparison of a Tibia of a Possible New Taxon of Shuvosaurid to Effigia  okeefeae’ by Garrett LeMons. These research projects were part of the coursework for GEOL 235: Research in Natural Sciences course.

According to the CCURI website, the colloquium is designed to provide community college students, who are conducting undergraduate research the opportunity to share research, develop professional meeting skills and network with students from across the country. Their goal is to bring together those committed to national science, technology, engineering, and mathematics (STEM) education reform.