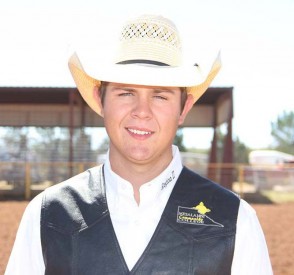 Kyle Jurney from Eunice, NM, represented the Mesalands Community College Rodeo Team at the 2016 College National Finals Rodeo (CNFR). The college finals ended earlier this month and was held at the Casper Event Center in Casper, WY. Jurney (header) competed in the team roping event with Bobby Flores (heeler) from Cochise College and finished 14th in the nation.

Coach Abbott says Jurney and Flores had never competed together, prior to the college finals. He said their situation was a unique circumstance and they made the best of it. The team ropers were sitting in sixth place halfway through the competition. After that, they had a little trouble in this event, which brought them to 14th in the nation in the team roping.

“Next year, they both plan on returning to the college finals and even though they will be going to different colleges, they are going to rope together,” Coach Abbott said. “So I think a new partnership was formed there. They are bound and determined to have another chance at the national title together next year.”

Coach Abbott is preparing for the upcoming 2016-2017 season for the Grand Canyon Region. He plans to have about 35-40 student athletes on the Mesalands Rodeo Team, with 22 returning and 15 new members on the team. He will have team members from across the nation, including: AR, NE, NM, NY, OR, PA, and WA.

“It’s always interesting and exciting about the number of different regions of the country we draw from,” Coach Abbott said. “It’s just amazing to me how a broad of a net this College can cater to because we have rodeo students from all points of the country.”

Coach Abbott was also selected to serve on the National Board of Directors as the Regional Faculty Director. In this leadership position, his duties will include: coordinating the National Intercollegiate Rodeo Association (NIRA) By-Laws and rules with college administration, evaluating the student athletes NIRA eligibility for the region, and act as the advisor to the Regional Governing Board, according to the NIRA Rulebook.