The Mesalands Community College’s Foundation, Inc. had its Shrimp Boil and….All That Jazz “Friendraiser” on Friday, April 13, 2012. The live jazz band, the friendly atmosphere, and the ample amount of shrimp, made the event fun and enjoyable for the 325 attendees, compared to 203 the previous year.

“This year we wanted to focus on friend-raising rather than just fundraising,” said Dr. Mildred Lovato, President of Mesalands. “We are pleased that by lowering the cost of the tickets, more people were able to attend. We want the community to feel welcome, because this is their community college.”

“I couldn’t believe that many of the art pieces had been created at the College. It was nice to see the work of some of our local artists,” said Merlinda Turner, a Tucumcari resident that attended the event. “I also really liked the student workers at the Shrimp Boil. As a Mom, I like to see students volunteer. They were all happy with smiles on their faces and were keeping conversations with everyone. I think the students might have been the highlight of the night for me.”

Twenty-five Mesalands students from the Phi Theta Kappa International Honor Society volunteered at this year’s event. Shrimp Boil scholarship recipients, Bailey Bates (Mexican Springs, NM), Megan McKinney (Tucumcari), and Emily Woolbright (Las Vegas, NV), also expressed their thanks at the event for the availability of scholarships, due to the proceeds from the Shrimp Boil

Bunni Morris was the winner of the summer/winter vacation package to the Retreat in Angel Fire and the Lodge at Sierra Blanca in Ruidoso. Morris accepted the Ruidoso trip, but decided to donate the Angel Fire trip back to the Foundation. Another drawing took place and Joanna Gutierrez was selected for the Angel Fire trip.

Also this year, any leftover food from the dinner was donated to the local Ministry of Hope.

The 325 attendees to this year’s Shrimp Boil had plenty of tasty food to choose from. 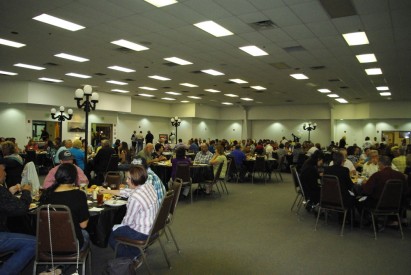 The Mesalands Community College Foundation, Inc. had record attendance to this year’s event.