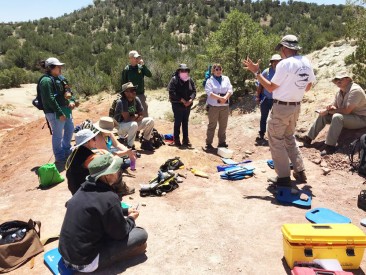 The paleontology summer field season at Mesalands Community College officially started in May with a class from McClellan Community College in Waco, TX. These students had the unique opportunity to earn college credit by excavating dinosaur-age vertebrates in the Quay County area and processing them in the Mesalands Community College’s Dinosaur Museum and Naturals Sciences Laboratory. Recently Mesalands offered a week-long paleontology field class and has another class scheduled this month. The paleontology field season will conclude with a Science, Technology, Engineering, and Mathematics (STEM) bridge course with the Cottonwood Gulch Foundation in Albuquerque, NM, that is geared towards high school students. This class will also take place in July.

This summer Mesalands Community College offered four paleontology field classes. In May, a total of 19 students and seven sponsors from McClellan Community College, completed a three-day course entitled GEOL 124: Triassic Vertebrate Practicum and earned two hours of college credit. This was the fifth year students from McClellan participated in this class, as part of their geology class assignment. Both Mesalands and McClellan are partner institutions of the Community College Undergraduate Research Initiative (CCURI). CCURI is a network of community colleges dedicated to providing access to undergraduate research at their home institutions.

Last week Mesalands offered the week-long paleontology field classes, GEOL 120: Paleontology Field Discovery. This four-credit hour class had ten students representing Alabama, California, Texas and New Mexico. Some of the students this year decided to share this unique experience with their families. Husband and wife Robert and Suzanne Curthoys, with their daughter KC Richmond, traveled from Folsom, CA to participate.

“I have enjoyed the whole experience and learning more about paleontology,” Richmond said. “This class was great, a once in a lifetime experience.”

GEOL 120 will be offered again on July 6-10, 2015. The cost of the class is $650. A non-refundable deposit of $100 is required at the time of registration. This cost includes tuition and fees, the use of tools and field materials, transportation to and from the excavation site, sack lunches, water and soft drinks for all five days, a barbecue dinner, and a summer field class t-shirt. 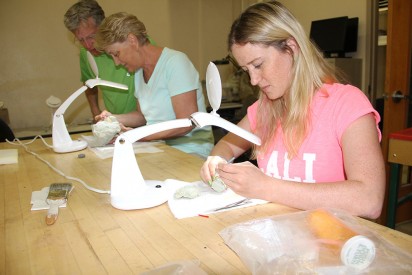 (Right to Left) KC Richmond, daughter of Suzanne and Robert Curthoys from Folsom, CA, begin to carefully extract the dinosaur fossil from the rock they found during a week-long paleontology field class at the Mesalands Dinosaur Museum.

The final field class, GEOL 118: Paleontology Field Expedition, is a Paleontology Trek offered through the Cottonwood Gulch Foundation on July 16-24, 2015. This STEM bridge course gives high school juniors and seniors the opportunity to work side-by-side with professional paleontologist Dr. Axel Hungerbuehler and his colleagues on excavation projects and bone-hunting missions.

New technology this summer also will help students and staff members find the exact location of fossils in the field.

“This year we also have a much-improved recording system that we set up last fall, that shows us where each bone came from and its orientation,” said Dr. Axel Hungerbuehler, Faculty, Natural Sciences/Museum Curator at Mesalands Community College explains. “There is a grid over the entire site that measures every fossil and shows us precisely where in the quarry, or in the rock the fossils are located. We have basically professionalized this process.”

Dr. Hungerbuehler stated this new recording system took weeks to set up. He said a team of surveyors from McClellan Community College verified the accuracy of their grid, during the field class in May.

“McClellan was quite amazed on how well our grid was aligned. They said our main baseline was a half degree off from the direction it should be, and usually two to three degrees off is still acceptable,” Dr. Hungerbuehler said. “We apparently did a good job!”

Dr. Hungerbuehler said that once the fossils are safely excavated and brought to the laboratory, students will then learn how to remove the fossil from the rock and then prep the fossil. The next step is to research the origin of the fossil.

“When students are out in the field they are recording not only the position of the fossil, they are also recording any other data, or information they may need later on,” Dr. Hungerbuehler said. “Students have to find out what animal they have? What bone of the animal did they find? What type of rock was the the fossil found in etc.? This information tells us how the animal or the carcass got into the rocks, and the type of environment that was there 200 million years ago.”

Dr. Hungerbuehler said this summer field season has already been very successful. This year students have found a variety of fossils from a crocodile-like phytosaur, including a tooth-bearing jawbone, a partial skull, armor plates, and teeth with the roots intact, which he says is a rare find. The phytosaurs found at the dig site lived in the Late Triassic Period, approximately 206 million years ago. Dr. Hungerbuehler stated another highlight was the slender hollow limb bone, possibly belonging to a Shuvosaurus reptile, a gracile, tooth-less relative of crocodiles. Dr. Hungerbuehler says there are more fossils in the field already exposed from previous work and will be extracted during upcoming field classes. He says it is always exciting to see what the students have found.