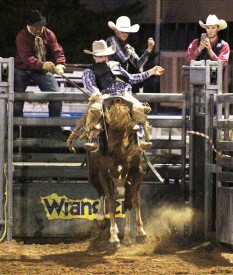 “I thought the Mesalands Fall Rodeo lived up to the standards that we’ve set for our rodeos here. Just like we always say, Honeycutt Rodeo continues to do a phenomenal job from a production standpoint. The Rodeo Team, the College faculty and staff, and other community volunteers, worked very hard last weekend to put on an outstanding rodeo,” said Tim Abbott, Intercollegiate Rodeo Coach at Mesalands. “I was especially proud of the performance of our Women’s Team. They had a pretty good weekend.”

Fellow teammate Sharli Macdonald, of Camp Verde, AZ also had another good rodeo, following her strong performance at Cochise College in Douglas, AZ. At the Mesalands Fall Rodeo, she made the short round in both the goat tying and team roping events. In team roping (header), she finished the average in sixth place with Dillon Smith (heeler) from Central Arizona College. Macdonald was fourth in the average in goat tying.

Assini and Macdonald together competed in five different events in the short round last weekend and earned a total of 290 points for the Women’s Team.

The saddle bronc riding event was very close in the short round. Clay Stremler of Winnemucca, NV has placed in either first or second place in all three rodeos this semester. Stremler and Jalen Joaquin from Cochise College have been battling for that top spot. Last weekend it was close once again, Stremler took second and won the reserve championship title with a total of 144 points. Joaquin earned 149 points and won first place in the average. Stremler is still leading in the regional standings with a total of 450 points.

Coach Abbott mentioned that bull rider Holden Hedgepeth from Damascus, AR, broke his left forearm during last week’s rodeo. He says he is in Albuquerque this week and will be undergoing surgery.

In steer wrestling, Chace Valdez of Estancia, NM was first place in the first round. He struggled in the short round and took a no time. Valdez still took sixth place in the average.

Valdez also competed in tie down roping. He had a strong performance in the long round and qualified for the short round. Teammate Kyle Jurney of Eunice, NM had a little more success in this event. Jurney made a good run in the short round and seized third place in the average.

“We had another exceptional 8th Annual Mesalands Fall Rodeo and Stampede Week. I would like to thank all of the volunteers, supporters, and sponsors for making these events successful,” said Dr. Thomas W. Newsom, President of Mesalands. “We welcome the opportunity to bring contestants and spectators, from not only New Mexico and Arizona, but from all over the country to our community and Quay County.”

The Mesalands Rodeo Team will kick off the spring season in March and will host their spring rodeo competition in April.

Below are the Grand Canyon Regional Standings: 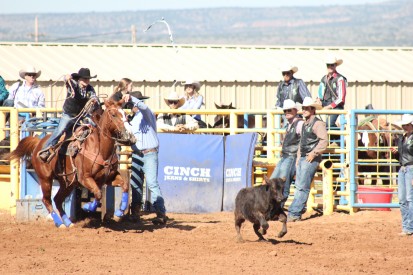 Caption (left) Arianna Assini from Oracle, AZ competing in the breakaway event at the 8th Annual Mesalands Community College Intercollegiate Fall Rodeo last weekend. Assini took fifth place in the average in this event. She competed in a total of three events in the championship round. 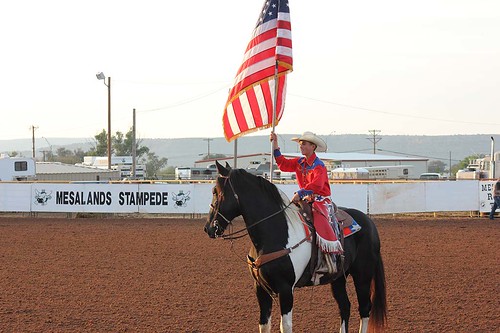