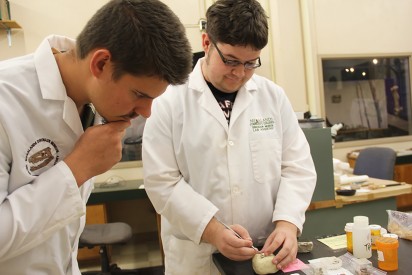 According to the CCURI website, this event gives community college students who conduct undergraduate research, the opportunity to share their research with other institutions, develop their professional skills, and network with students from across the country.

“Both of these students spent the summer relocating the original site in Quay County and they found new specimens,” said Gretchen Gürtler, Director Mesalands Community College’s Dinosaur Museum and

Natural Sciences Laboratory. “Were also every excited to be working with Dr. K.C. McKinney at the U.S. Geological Survey.”

Gürtler also stated that during the CCURI Colloquium, the students visited the Petrified Forest National Park (PEFO) in Arizona and met with paleontologist Dr. Bill Parker. Parker showed the students specimens from the Late Triassic Period that are included in the PEFO collection.