Mesalands Community College is pleased to announce that one of their student’s research projects has once again been accepted by the Community College Undergraduate Research Initiative (CCURI). Stephen Smith, 21, a geology student at Mesalands, conducted water research at Conchas Dam, in collaboration with the U.S. Army Corps of Engineers. Smith analyzed the plankton count, pH measurements, and the dissolved oxygen readings, to research how the drought conditions in New Mexico, impact the concentration of dissolved oxygen and how this may affect macro invertebrates. Performing undergraduate research meets the initiatives of both the College and the Army Corps of Engineers, to improve student access and success in Science, Technology, Engineering and Mathematics (STEM) disciplines.

Smith will be presenting his research at the CCURI Fall 2013 Colloquium in Philadelphia, November 1-3, 2013. Only 40 student research projects were accepted from colleges throughout the country.

In March, Smith with two other paleontology students also presented their findings of three ischia bones (part of the hip) that represent possibly a new species of a poposauroid pseudosuchian. These bones were found in Quay County and were approximately 200-210 million years old.

“This is a once in a lifetime opportunity to attend a two-year institution and be able to conduct research. The fact that we are traditionally thought of as a technical college, this really puts our face on the map for research opportunities, as well as preparing students for the next step,” Smith said. “Earlier this year we went to another CCURI event and it was awesome! We got a lot experience on how to present information in a public forum and I look forward to practicing those skills in November.”

Mesalands has been working with the Army Corps of Engineers for the past two semesters. This research project is part of a course at Mesalands, GEOL 289: Independent Study in Geoscience. In addition to Smith, Sanda Garrett, 17 and Nikki Vazquez, 37, are also involved in this research project.

Gretchen Gürtler, Director of the Mesalands Dinosaur Museum and Natural Science Laboratory, explains the significance of this research.

“We are working with data that the Army Corps of Engineers have collected for the past 70 years and we are collecting present data to see if there is a pattern. Especially a pattern with anomalies, like El Niño and La Niña,” Gürtler said. “The reason why this is important, because at some point in time  if the Army Corps of Engineers wants to restock the lake at Conchas, they’ll know what the pH levels will be to see what animals will survive? What varieties of native fish will survive? And which ones won’t, because of the amount of fluctuations in the pH levels or dissolved oxygen.” 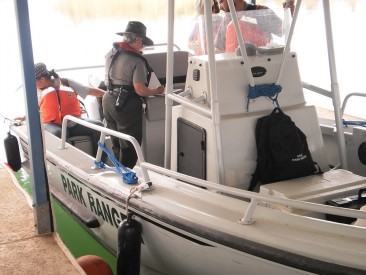 Mesalands students Garrett and Vazquez, will also be attending the New Mexico Academy of Science and New Mexico Experimental Program to Stimulate Competitive Research Annual Meeting and Symposium in Albuquerque, NM, November 9, 2013. This event is an open forum for sharing results of research and teaching on “Impacts of Climate Change on Water in New Mexico” and “Sustaining Energy Development in New Mexico.”

Mesalands funded these research projects through the U. S. Department of Education – Hispanic Serving Institution’s STEM grant, the CCURI grant, and the Transforming Undergraduate Education in STEM grant.