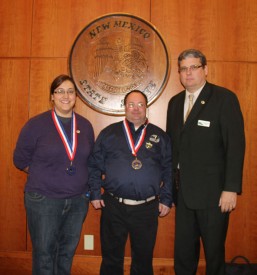 Mesalands Community College is pleased to announce that Victoria Harb, 29 and Alfred McIntosh, 47 have been selected to the 2014 All-State New Mexico Academic Team. This honor recognizes their commit­ment to academic excellence. Each student will receive renewable full-tuition scholarships for up to four consecutive semesters towards a bachelor’s degree at a New Mexico public university or college.

“Mesalands set me up for success,” Harb said. “This is a small community college and for me I was terrified about going back to school. But at Mesalands, all of the teachers are easily accessible and everyone is very friendly.”

Harb stated that she served seven years in the army. She began attending Mesalands in the spring of 2012 and will be graduating in May with an Associate of Arts Degree in Human Services with an option in Social Work. She plans to pursue her bachelor’s and master’s degree in Social Work from Eastern New Mexico University starting in the fall.

“I was pretty excited about this recognition. When I was growing up, I was always told that I wasn’t smart enough and that’s one reason why I joined the army,” McIntosh said. “I’ve proved myself since then and made the honor roll every semester since I started college. So now I’m rather excited about college.”

McIntosh served 23 years in the army. He began attending Mesalands in the fall of 2012. He will be graduating in May with an Associate of Applied Science Degree in Wind Energy Technology from Mesalands. Also, after completing two classes this semester, he also plans to obtain an Associate of Arts Degree in Liberal Arts. McIntosh plans to pursue a bachelor’s degree in Wind Energy Technology and is still researching universities that offer this program. 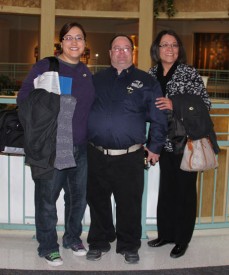