Mesalands Community College is pleased to announce that at the 26th annual meeting of New Mexico Mathematical Association for Two-Year Colleges (NMMATYC) earlier this month, a former dual enrolled student received a scholarship and two other students presented their mathematical research.

(Middle) Madeline Wiegel was the recipient of the 2015 Vicky Froehlich Memorial Scholarship. Wiegel was presented with her award at the 26th annual meeting of New Mexico Mathematical Association for Two-Year Colleges (NMMATYC). ). (Left) her father C.J. Wiegel and her former instructor Dr. Philip Kaatz, Mathematics/Physical Science Faculty at Mesalands also attended the event.

This year’s meeting was a joint meeting with the southwest section of the Mathematical Association of America. Community colleges and some four-year institutions from El Paso, New Mexico, and Arizona attended the meeting. Approximately 140 math educators and students were in attendance at this meeting.

Madeline Wiegel, a former dual enrolled student at Mesalands Community College and a 2014 graduate of Tucumcari High School, was awarded the 2015 Vicky Froehlich Memorial Scholarship offered by NMMATYC. In order to be considered for this award, students must have taken two additional math classes beyond College Algebra. 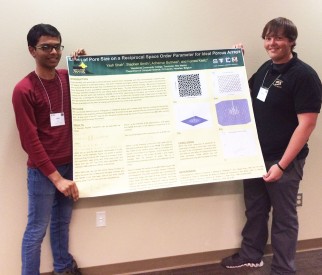 Mesalands Community College students Yash Shah (Left) and Stephen Smith, presented their research on the “Effect of Pore Size on a Reciprocal Space Order Parameter for Ideal Porous Arrays” during a poster session at the annual math meeting in El Paso, TX.

Also at the 2015 NMATYC meeting, Smith and Shah presented their research on the “Effect of Pore Size on a Reciprocal Space Order Parameter for Ideal Porous Arrays” during the poster session. Smith and Shah are both enrolled in MATH 293A: Introduction to MATLAB at Mesalands instructed by Dr. Forrest Kaatz.

“Conducting and presenting their research gives our students the opportunity to see what other students are doing,” Dr. Forrest Kaatz said. “They also gain experience in explaining a project to someone who may know a lot about math, but not about the specific project they are working on. The students have to simplify the description of the project and explain in a few minutes, the highlights of their results.”