Jim Curry, 67, a Fine Arts Student at Mesalands Community College, recently completed a bronze war sculpture honoring the soldiers from Union County that died in World War I, World War II, Korea, and in Vietnam. Curry designed and casted four field crosses that took two years to complete. A field cross is made up of a soldier’s boots, his rifle, and a helmet signifying a fallen soldier. The sculpture was permanently installed at the Union County Memorial, in Clayton, NM, on Memorial Day, May 28, 2012.

“We have a monument in Clayton for all the people from Union County, who died in the wars. This sculpture is to honor them,” Curry said. “I didn’t think people really knew what it was and I thought we needed something to make people more aware and stop and see the names on the monument.”

One of the names listed is Curry’s uncle, who had been killed in World War I. Curry is a Vietnam Veteran and said he knows many of the soldiers listed from the Vietnam War.

Curry said after he retired from the Public School System in Clayton, he began taking art classes at the foundry at Mesalands in 2007, commuting every week from Clayton. He said he had always been interested in art and has enjoyed creating bronze sculptures at the foundry. After discovering his new talent, he visited with members of Union County and the Veterans of Foreign Wars (VFW), about the possibility of creating sculptures for the Union County Memorial. They agreed and have been major contributors to the project.

Curry then began the process of creating the war sculpture at Mesalands, which included researching the various pieces of soldier gear, depicting the different eras. Curry visited the Tucumcari Historical Museum and used a pair of their World War I spats to build a replica in metal.

“It was interesting to see how the style has changed. There are some similarities and differences. Jim came up with his own technique and process to design the war sculpture. It was quite ingenious. I’ve enjoyed witnessing his research process,” D’Jean Jawrunner, Fine Arts Faculty at Mesalands said. “Jim has worked non-stop on this sculpture. It has been a labor intensive project of love.”

Curry has been taking three semesters of classes at Mesalands to complete this project, including sculpture, mold making, and casting.

“I do plan to continue at Mesalands, as long as I am able. My wife, Caroll, is also a student at Mesalands and she loves it! This program is the best in the state and the best I’ve ever heard of,” Curry said. “I’m just very grateful for the Community College and the program, and the instructor is fantastic. They have made my life great in my retirement.”

Jim and Caroll plan to continue their art classes at Mesalands in August. 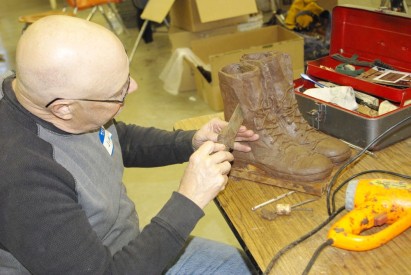 Fine Arts Student, Jim Curry, 67, sculpts boots for a Vietnam Field Cross that was installed at the Union County Memorial in Clayton on Memorial Day.