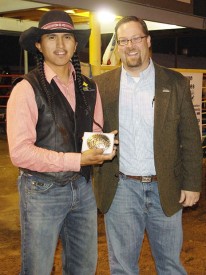 “It’s quite a feat to win your own rodeo because there are so many distractions. Every competitor has multiple jobs to do to produce the rodeo, and everyone has family in town, and on top of that you still have to compete. That’s why I think it is so impressive for our Team to win their own rodeo,” said Tim Abbott, Interim Intercollegiate Rodeo Coach at Mesalands. “I think the weekend was even better than expected. Both Meet the Stampede Day and the rodeo was better than last year, when it came to attendance, production, and the success of our Rodeo Team. Those three days were the most fun I’ve had all semester. I love putting on a good rodeo.”

Coach Abbott also stated that he knew once the rough stock competitors and the timed event competitors performed well during a single rodeo competition, that a team championship title was possible. 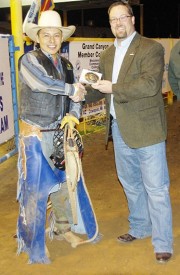 “I feel really good about my win last weekend and it was really awesome,” Harvey said. “The horses I drew were both amazing, especially in the championship round. That horse was just up in the air and everything.  It was also great to have my parents in the stands to watch me win both rounds. It was just something else.”

Sophomore Devyn Sisneros of Santa Rosa, NM was first in the long round in saddle bronc riding. Sisneros ended the rodeo fourth in the average. Sisneros finished the fall semester fourth in the region

In team roping, freshmen Chance Hunter and Tyler Sam both from Chinle, AZ, were second in the long round and finished fifth in the average.

During the Mesalands Rodeo, pink barrels were used during the barrel racing event, in memory of Meagan McCain, who was a Rodeo Student that was killed in a car accident by a drunk driving. Coach Abbott said that Mesalands plans to continue to incorporate Meagan McCain and her legacy into various student and community events, including Mesalands rodeo competitions and Student Safety Week.

“On behalf of Mesalands Community College and the Mesalands Rodeo Team, I would like to thank all of the sponsors, volunteers and supporters of Stampede Week and the 7th Annual Mesalands Rodeo Competition,” said Dr. Thomas W. Newsom, President of Mesalands. “We could have not made this event a success without your help and we look forward to even a bigger and better rodeo for the spring.”

Mesalands Community College will host their spring rodeo in April 2015.