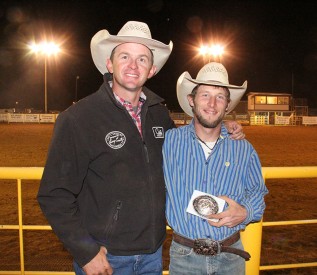 “The 6th Annual Mesalands Rodeo was a huge success! I don’t think the rodeo could have gone any better. I was extremely pleased with how smooth it ran and how quickly it ran. That’s one of the keys to putting on a successful rodeo production. We kept the action moving. This was a great show not only for the rodeo contestants, but for the fans as well,” said Tim Abbott, Interim Intercollegiate Rodeo Coach at Mesalands. “Everyone I spoke with and had nothing but great things to say about our rodeo from the hospitality to the accommodations and the rodeo itself.”

Sophomore Devren Myers from Santa Fe, NM was the official championship title winner in the bull riding event Friday night and was the only contestant that qualified for the championship round. 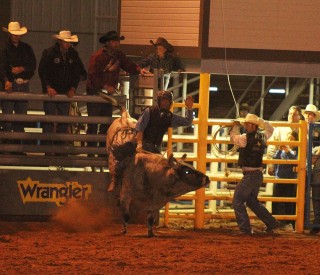 “I knew I had it sewed up the night before, so on Saturday I was just going out there to have fun! The second night was just for regional points,” Myers said. “I kind of wished some more people would have made it to the short round with me. There are a lot of guys out there that have been working just as hard as I have, or even harder. I felt kind of dead lucky to win it like I did.”

Myers earned a total of 180 points. He said that after his performance last weekend, he is hoping to move up to third or fourth place in the Grand Canyon Region. This is his first championship title win this season.

“I think it was a long time coming for Devren. He has worked very hard this year trying to get where he wanted to be. He drew two really good bulls at this rodeo and rode them both. He deserved the win that he got,” Coach Abbott said. “Other team members, Edmiles Harvey, Sam Taylor, Mike McGinn, Kit Pettigrew and Hayden Moore also performed well last weekend and should have higher regional standings after this rodeo.”

Other individual results at the Mesalands Rodeo include:

Sam Taylor
2nd in the average in Saddle Bronc Riding

Mike McGinn
3rd in the average in Steer Wrestling

Kit Pettigrew
2nd in the average of the Tie-Down Roping 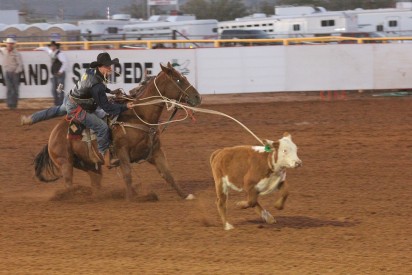 “We had a great Mesalands 6th Annual Intercollegiate Rodeo last weekend,” Dr. Thomas Newsom, President of Mesalands Community College said. “I personally want to thank all of the staff members and students that volunteered their time to make Stampede Week a success. Coach Abbott and Assistant Stanbrough should be commended for their hard work organizing this rodeo and leading such a great Rodeo Team. I also want to thank all of the community members and the sponsors for their continued to support of the Mesalands Rodeo Team. Our plans is to make Stampede Week a bigger and better event next year.”

The Mesalands Rodeo Team will be hosting the Taos Muncy and Cody Taton Bronc Riding School, October 18-20, 2013 at the Quay County Rodeo Arena.