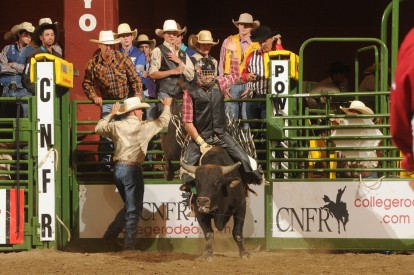 The Mesalands Community College Rodeo Team will have their first rodeo competition for the Grand Canyon Region this weekend at Dine College in Tsaile, AZ. With two new rodeo coaches this year, and highly competitive returning student athletes, the Mesalands Rodeo Team is looking forward to another strong season.

“Our Team is smaller this year than it has been in the past, but we have a lot of quality student athletes returning this year. We have some experienced men and women that I feel will be highly competitive in our region and on the national level. With that being said, our plans for being a competitive team have not changed,” said Coach Abbott. “We plan on winning the region for the Men and Women’s Team, and then taking an entire team to the college national finals in June.”

Coach Abbott said many of the returning team members, including two bull riders, a steer wrestler, a team roper, and two breakaway ropers have competed at the College National Finals Rodeo (CNFR).

Sophomore David Gonzalez from Chihuahua, Mexico, last year took 21st at nationals in bull riding. He also came in third in the region behind two other Mesalands bull riders last year. Gonzalez majors in Animal Science and says he is excited about the new rodeo season.

“I’m going to work hard and I plan to make the college finals again,” Gonazalez said. “We have a smaller Team this year, but we’re really strong!”

Last year, the Mesalands Women’s Team claimed the Grand Canyon Regional Championship Title and finished 11th in the nation. The Men’s Team ended the season 24th in the nation. Also, eight out of the ten team members that competed at the 2013 College National Finals Rodeo (CNFR), placed in the top 25.

“Mesalands has a rich history of success with our intercollegiate rodeo program and I know that Coach Abbott and his staff will continue that success with our current student athletes. As in the past, I am confident that Coach Abbott will ensure that our Rodeo Team is not only successful in the arena, but in the classroom as well,” said Dr. Thomas W. Newsom, President of Mesalands Community College. “The College and I are extremely excited about the upcoming season and especially about bringing a CNFR quality event to Tucumcari on October 11-12.”