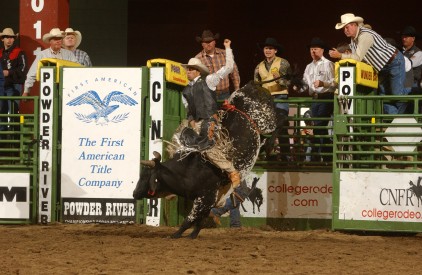 The Mesalands Community College Men’s Rodeo Team has finished first in the nation in the year-end standings and the Women’s Team is ranked sixth in the nation. After completing 10 successful rodeos this season, the Mesalands Rodeo Team will be sending 10 team members to the College National Finals Rodeo (CNFR), the most in the program’s history.

“This is the first year that our Team will have a representative in every single event at the college finals. It’s pretty impressive to have that dominate of a year,” C.J. Aragon, Mesalands Intercollegiate Rodeo Coach said.

Team Members Fran Marchand of Omak, WA and Macy Fuller of Clarkston, WA will be competing in multiple events at the CNFR, which is quite a remarkable accomplishment.

Last year Marchand competed at the CNFR and finished the season 13th in bull riding and 22nd in saddle bronc riding. He says he looks forward to nationals again this year.

“I would like to stay on all my bulls this time at nationals,” Marchand said. “I will be competing in some pro rodeos this summer to prepare.”

Freshman Fuller has had a successful season on the Women’s Team. She is currently ranked third in the nation in the Women’s All-Around and 15th in goat tying.

“I’m excited to see what nationals will be like and how it plays out. It will be a fun experience!” Fuller said.

Fuller has qualified to compete in breakaway roping, goat tying, and the team roping event with fellow teammate Daniel Munoz-Baeza from Chihuahua, Mexico.

Sophomore Shelby Rita of Sunset Beach, HI, will be competing at nationals for the second consecutive year in barrel racing. Last year she was the only representative from the Women’s Team and she finished 20th in barrel racing.

Freshman Christian Stremler of Winnemucca, NV will be competing in saddle bronc riding at nationals. He is currently ranked sixth in the nation.

Freshman Jordan Minor of Navasota, TX has also earned his ticket to nationals this year. He will be competing in tie down roping and is currently ranked 20th in the nation.

Sophomore Kit Pettigrew of Ft. Sumner, NM will be competing in tie down roping.

Freshman Bailey Bates of Mexican Springs, NM has qualified to compete in breakaway roping at the CNFR.