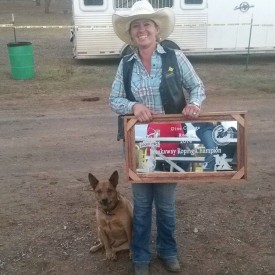 “This rodeo made me really excited about this upcoming season. This showed me that our student athletes are mentally ready to compete,” said Tim Abbott, Interim Intercollegiate Rodeo Coach at Mesalands Community College. “I was really encouraged by the performance of our freshman. Nobody was intimidated. They were very competitive and should be expected to win every weekend.”

Coach Abbott said that the student athletes who competed in the rough stock events, had a hard time at last weekend’s rodeo and did not advance to the short round.

Sophomore Betty Pack of Aztec, NM had an outstanding weekend in the breakaway event. Pack was third in the short round with a time of three seconds flat. She ended first in the average by almost one second ahead of the second place winner. Pack claimed the breakaway roping championship title.

Sophomore Skye Valdez of Estancia, NM was 6th in the short round and finished sixth in the average in barrel racing.

“Our men and women have started this season out strong and are fired up for the next rodeo,” said Coach Abbott. “We know what we need to work on and we are ready to practice and work harder, as we get ready to compete in Douglas.”

The next rodeo competition for the Mesalands Rodeo Team will be at Cochise College in Douglas, AZ, September 26-27. 2014.