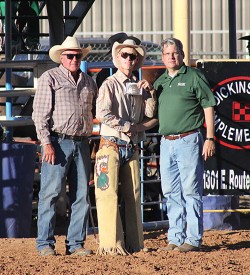 “What was exciting for me as a coach, was all six of our student athletes on the Men’s Team, earned points at this rodeo. That’s a hard thing to do,” said Tim Abbott, Mesalands Rodeo Coach at Mesalands.

“So to win second at our rodeo, is an accomplishment with 540 points. This is the highest point total of the season. This shows that we are trending up and we need to continue to have these good performances.”

One of those strong performances was by Kenneth “Blue” Wilcox from Greenbrier, AR, who dominated the bull riding event last weekend. Wilcox was only one of two qualifiers for the championship round and the only student athlete that covered two bulls. Wilcox finished in first place in all three rounds at the rodeo and earned a total of 161 points. Wilcox is now leading the region in this event and says he enjoys being a student athlete at Mesalands

“I loved the rodeo! We have a good team and we have good coaches,” Wilcox said. “I love being here at Mesalands! We get to make things in the shop every day in Artistic Silversmithing and it doesn’t feel like class. I also get to get on bulls all throughout the week.” 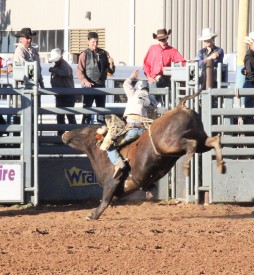 Kenneth “Blue” Wilcox electrified the bull riding event and was crowned bull riding champion at the rodeo. Wilcox is now leading in the regional standings.

Tie down ropers Chace Valdez from Estancia, NM and Justin Stegall from Morristown, AZ had a strong start to the rodeo, taking first and second in the long round. Valdez was fourth in the average and Stegall was sixth. They had a little trouble in the short round, but are still doing very well in the regional standings. Following the Mesalands Fall Rodeo, Valdez is now first in the region and has a solid lead with 310 points. Stegall is fourth in the region with 160 points.

For the Women’s Team, the competition was tough at the last weekend’s Mesalands Fall Rodeo. Arianna Assini from Oracle, AZ qualified for the championship round in the goat tying event. She was fifth in the long round and fifth in the average. Assini has a total of 195 points and is currently fourth in the regional standings. 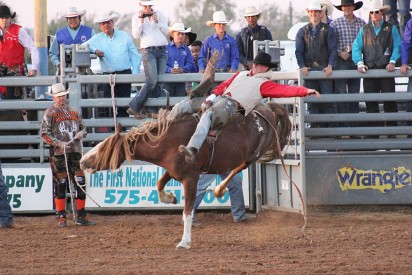 Fellow teammate Taniah Nez, from Ganado, NM, also made it to the championship round in the breakaway roping event, for the second time this semester. Coach Abbott says her confidence level continues to go up, as she slowly moves up in the standings.

“We hosted another great Mesalands Fall Rodeo last weekend. It was exciting to have nearly 200 contestants and their families, visiting our community over the weekend,” Dr. Newsom said. “On behalf of Mesalands and the Mesalands Rodeo Team, I would like to thank all of the volunteers, sponsors, and supporters, that continue to make this community event successful.”

The Mesalands Rodeo Team will kick off the spring season in March.