The Mesalands Community College’s Rodeo Team began the new 2013-14 season last weekend at Diné College in Tsaile, AZ. For their first rodeo competition for the Grand Canyon Region, the Men’s Team brought home a championship title and finished in fourth place with 370 points. 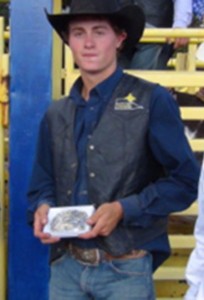 “It went pretty well, of course as Coaches, Staci and I wanted a little bit more, but I was very impressed and we had a good rodeo, especially for our first one,” said Tim Abbott, Interim Intercollegiate Rodeo Coach at Mesalands. “The Women’s Team didn’t have a good first rodeo. I was disappointed on how the Women’s Team faired, however  it was not from a lack of effort. They tried their hearts out and did what they could do; it just didn’t go our way. But it didn’t lessen my expectations for the Women’s Team.”

Seven of the student athletes on the Men’s Team made the short round in their events. Three of those were on the point earning team, Kit Pettigrew, Adriano Long, and David Gonzalez

Sophomore Pettigrew of Ft. Sumner, NM won the long round of the tie-down roping event and second place in the short round. He finished first in the average, winning the championship title.

In steer wrestling, Sophomore Haydon Moore of Clovis, NM won second place in the long round and had a no time in the short round. Moore finished seventh in the average.

“The first thing that exceeded my expectations was our men and women’s professionalism at the rodeo, and their conduct at the rodeo, vastly exceeded my expectations. Mesalands did an outstanding job with that,” Coach Abbott said “I have been encouraging our student athletes to just be themselves, try to do the same thing at the rodeo that they do in the practice arena. Don’t try to go above and beyond your abilities, or don’t try to be super-spectacular. Just do the best job that you can do and I think we will do quite well. After our first rodeo, my expectations are just as high, or even higher than they were before.”

The next rodeo competition for the Mesalands Rodeo Team will be at Cochise College in Douglas, AZ, September 27-28, 2013.