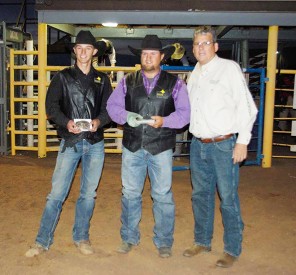 Team ropers Jacob Rounds of Broadalbin, NY (header) and Koly Ray Spears of Lovington, NM (heeler) won first place in the average with a time of 18.5. Five out of the 10 team ropers in the short round, were from the Mesalands Rodeo Team. Clayton Torres of Bosque Farms, NM (header) and Eddie Torres of Isleta, NM (heeler) were third in the average. Jesse Estill from Lovelock, NV (header) and Brady Jenkins from Chino Valley, AZ (heeler) ended the rodeo sixth in team roping.

“That’s what I’ve wanted out of my team ropers all year, because we easily have the best set of team ropers in the region,” said Mesalands Intercollegiate Rodeo Coach, Tim Abbott. “Our short round didn’t go like it should have in the team roping, but we’re definitely making progress.” 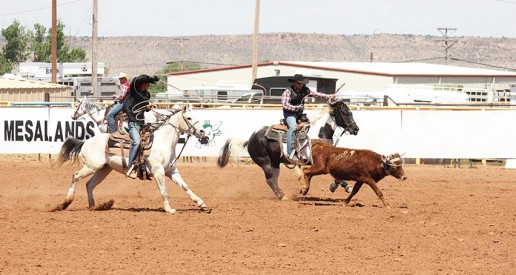 For the Women’s Team, Arianna Assini from Oracle, AZ, was second in the Women’s All-Around with 180 points. She also clinched the reserve championship title in goat tying with a time of 8.4 in the short round, and finished second in the average. 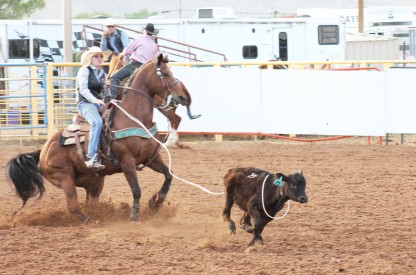 Sharli MacDonald had a strong performance at the Mesalands Spring Rodeo.  She placed fourth in the average in breakaway roping and is currently 5th in the region.

“Obviously, we wanted to have a better short round than we did, but considering all the work our student athletes had to do at our home rodeo and all the distractions, I’m really pleased with how they performed,” said Coach Tim Abbott. “I also want to thank all of the faculty and staff that helped, because this rodeo wouldn’t be nearly the success it is without them. I know I’ve said this before, but I think everyone one of our rodeos continues to improve.”

The Mesalands Rodeo Team will be travelling to New Mexico State University in Las Cruces, NM this weekend, April 29-May 1, 2016, for their last rodeo of regular season.

Below are the current Grand Canyon regional standings: