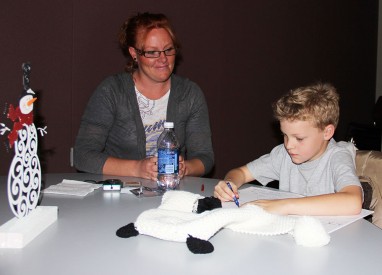 Kyla Massengill looks on as her son, Michael Witterman, 6, colors the wind turbines in the new Mesalands coloring book at the Fourth Annual Lighting Courtyard Event.

Mesalands Community College held its Fourth Annual Lighting of the Courtyard on Thursday, November 30, 2012. There were 72 attendees to the event, including community members, Mesalands students, and staff members.

“We are very pleased to have another successful Lighting of the Courtyard,” said Dr. Aaron Kennedy, Vice President of Student of Affairs. “We are also excited to see more members from the community join us for such a fun, family event.”

Attendees to the event were greeted by Santa and his elves that pulled the power switch to light the Mesalands Courtyard. After the Courtyard was lit, community members were welcomed inside for pictures with Santa. They also enjoyed hot chocolate, apple cider, cookies, and crafts for the kids. Mesalands debuted their first ever coloring book that contains various drawings of their new mascot the “Stampede.” The drawings were created by Lila Sandoval, Fine Arts Student at Mesalands.

Attendees Kyla Massengill and her son Michael Witterman, 6, enjoyed the festivities at the event.

“This was awesome! My favorite part was the hot cocoa and the coloring book was awesome too,” Witterman said.

Massengill said she moved to Tucumcari from Aztec, NM in June last year because Michael’s father Jason Witterman, wanted to pursue a degree in Wind Energy Technology. Jason is finishing his first semester at Mesalands and Massengill says she plans to start taking classes in the spring as well.

“Mesalands has a real homey feeling to it,” Massengill said. “Everyone’s really nice and helpful. It seems like all of the people that are a part of the College, sincerely care about making a difference.” 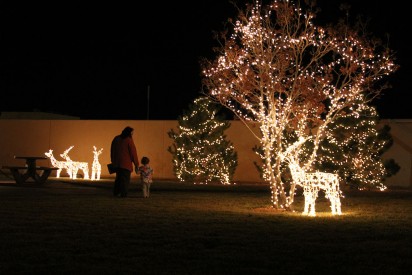