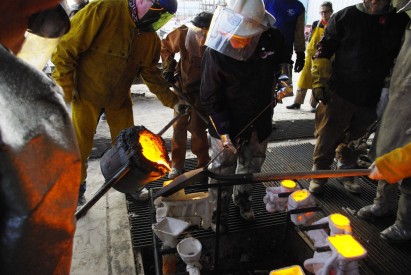 The cast iron glows in the night.

eight different states participated. In honor of the 15th year, the College scheduled various activities throughout the week for Mesalands students and the Quay County community. Activities included a potluck dinner with the artists, a recognition ceremony for Henry Gonzalez, an art show, and a performance by the Kill County Band.

“I love to cast iron! I have brought students nine times from different colleges to participate in the Mesalands Iron Pour,” said Dana Chodzko, Instructor for the Sculpture Department for the Institute of American Indian Arts of Santa Fe.  “This class is the most incredible inspiration-it changes the student’s lives as artists and as individuals. And this is such a great community!”

On Wednesday the College had a recognition ceremony for Henry Gonzalez at the Mesalands Community College Dinosaur Museum and Natural Science Laboratory. Gonzalez was the Technical Assistant for the Fine Arts/Bronze Program at Mesalands. A bronze commemorative plaque created by Patrick Garley, an Iron Pour student from Alaska, was installed in the Museum and in the foundry. Gonzalez was from Tucumcari and worked at the College for 18 years. He started as a student under Gary Coulter, former Fine Arts Instructor at Mesalands and was involved in mold making and casting. He also assisted in creating the bronze sculptures for the Museum. He died in 2005. There were a total of 90 people that attended the recognition ceremony. 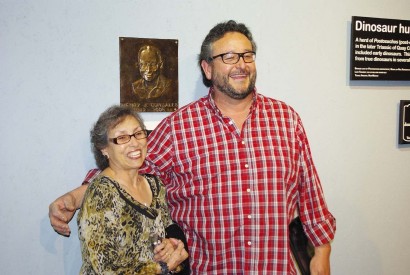 “Henry devoted his life to making the Dinosaur Museum and the Fine Arts/Bronze Program a success. He was a great supporter of Mesalands and was always ready to help wherever he could. I want to thank everyone that came to his recognition ceremony to show their support.” said D’Jean Jawrunner, Art Faculty at Mesalands. “And we were thankful for yet another safe Iron Pour.”

Following the recognition ceremony, was an art show at the Mesalands Library. On display was the students’ work, including cast iron pieces created at last year’s iron pour.

On Thursday the Kill County Band had 62 attendees. This special performance was co-sponsored by Mesalands and Quay Council for Arts and Humanities. On Friday the pouring of the iron began with the Opening Ceremonies at noon and although the pour was hot and exhausting, the thrill of the pour continued until about 8 pm that night. The next morning the artists cracked open their shells or opened their sand molds to unveil their cast iron masterpieces, they had worked on tirelessly all week and even months before the Pour.

“I wanted to commend D’Jean Jawrunner, founder of this fantastic event, for her hard work, dedication and perseverance. This year was the best year ever!” said Natalie Gillard, Vice President of Academic Affairs. “A special thanks to the community in their ongoing support and participation for this annual event.” 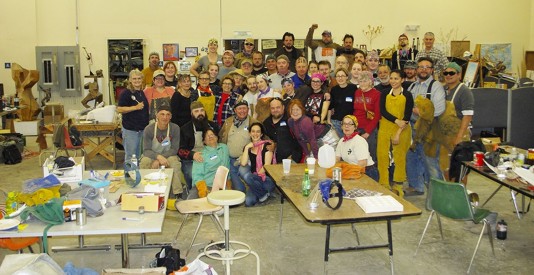