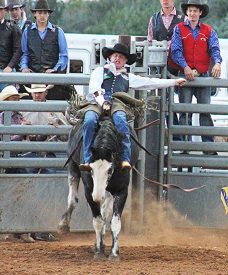 The Mesalands Community College Rodeo Team hosted the 10th Annual Mesalands Grand Canyon Region Intercollegiate Fall Rodeo last weekend at the Quay County Rodeo Arena. Mesalands reported a total of 185 attendees to the Friday night rodeo and 293 on Saturday night. Attendees to the rodeo had the chance to witness some very exciting and emotional moments at the last rodeo of the fall season.

“I think the rodeo went great! The weather was fantastic and we had record attendance and record sponsorships, from our entire community,” said Dr. Thomas W. Newsom, President of Mesalands Community College. “This was definitely one of the most significant rodeos we have had in the last 10 years.”

The Friday night rodeo started with the bareback riding event. The colts in this event were a little unpredictable. Scotty Bevins from Amsterdam, NY, and a member of the Mesalands Rodeo Team, broke his arm, after the colt fell during his performance. Bevins was then given a re-ride and finished first in the long round. He then advanced to the championship round and was unable to compete, due to his injured arm. Bevins still did very well at the rodeo and tied for second place in this event. He finished the fall season with a total of 300 points and fourth in the region. 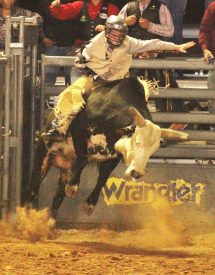 Kenneth “Blue” Wilcox from Greenbrier, AR, and a member of the Mesalands Rodeo Team, had the only eight-second ride in the final round of bull riding.

The Saturday night rodeo began with a special tribute in memory of Koly Ray Spears. Spears was from Lovington, NM and a member of the Mesalands Rodeo Team. He graduated in 2016 with a degree in Wind Energy Technology. He was also the team roping champion with teammate Jacob Rounds, at the Mesalands Fall Rodeo 2016. Spears was recently in a fatal car accident. To pay tribute to Spears, students and faculty from the Wind Energy Technology Department at Mesalands, draped an American flag on the side of the College’s wind turbine on campus. During Saturday’s grand entry, the competitors faced the flag as the national anthem played in the background.

“Saturday night was a class act that reflects on you all,” said Cresley Spears, mother of Koly Ray, after watching Saturday’s tribute to her son. “My heart will forever be grateful for the amazing tribute. Thank you all so much and go Stampede!”

The excitement continued on Saturday with the championship round. Bull rider

Faculty and students in the Wind Energy Technology Program at Mesalands Community College, drape an American flag on the side of the wind turbine, in a special tribute to a former student athlete, Koly Ray Spears.

Kenneth “Blue” Wilcox from Greenbrier, AR, and a member of the Mesalands Rodeo Team, made a comeback at the rodeo. Wilcox, the 2016 Grand Canyon Champion Bull Rider, has had rough start to the season. As the final competitor Saturday night, in a friendly competition with New Mexico State University, Wilcox had an electrifying 82-point performance. He was the only competitor that stayed on for his eight-second ride. His final performance was not eligible for regional points, but adds to the excitement for the spring season.

“There was no better way to end the rodeo!” said Matt Hughes, Intercollegiate Rodeo Coach and Faculty Member at Mesalands. “Every one of our student athletes went out there to win. Our team is pretty young and I think this was more of a maturing semester for them. Next semester, I look for them to calm down more and just compete and have fun!”

Coach Hughes stated that he plans to focus on the fundamentals of the sport with the team and more importantly, will continue to make the student’s college education a top priority.

The Mesalands Rodeo Team will begin the spring season in March 2018.