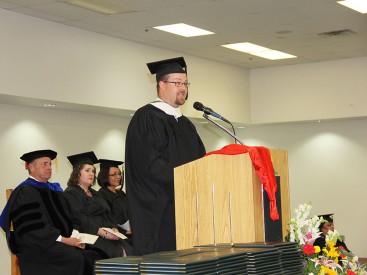 Mesalands Community College held their commencement ceremony on May 16, 2014, at the Tucumcari Convention Center, and had over 500 attendees at the event.

Dennis Roch, New Mexico Representative and Superintendent of Logan Municipal School District, delivered the graduation address. Roch stated that the Mesalands graduates were true superheroes for overcoming obstacles to obtain a college education. He used Dennis Ulibarri, one of the Mesalands graduates, as an example.

“No, the real superheroes are sitting in this room.  And they include my friend Dennis Ulibarri, one of tonight’s graduates, who a few short years ago was forced to start over after a rare medical condition left him paralyzed.  Talk about a superhero! He didn’t just learn math, history, and science, but had to learn how to walk again,” Roch stated “No, you’re already superheroes in my book, because you stuck it out and earned your degree.  Even if you can’t actually fly, the sky’s the limit, and you’re about to soar! Congratulations!” 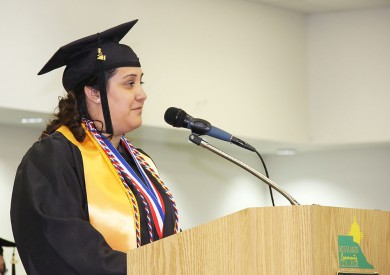 Victoria Harb was selected to as the Student Speaker as commencement.

After an emotional speech, Roch gave Ulibarri his superhero cape that he used during his presentation.

Graduates Victoria Harb and Alfred McIntosh were recognized at commencement for being selected to the 2014 All-State New Mexico Academic Team. Also, for the first time this year, graduates that were U.S. veterans or former active duty military, were given special chords to wear during commencement. Both Harb and McIntosh had served in the military. Harb was also the Student Speaker at commencement.

“To my fellow graduates, we come from all walks of life. We all have our own stories to tell and had our own journey here at Mesalands. After today we will march on to our own unique paths to our futures,” Harb said. “We chose this College to bring us one step closer to our ultimate goal. To give us the tools we needed for a better future, or to simply give us a new beginning.”

“Graduation is a very special day for Mesalands Community College and for our community. This is the time of year that we have the opportunity to see all of the hard work from our students and staff members pay off,” said Dr. Thomas W. Newsom, President of Mesalands Community College. “Our top priority at Mesalands is student success and making a difference one student at a time. You have all made an impact in our lives at Mesalands, and we hope in the future that you will help others make their dream of obtaining a college education, a reality.”

Music was provided by the Tucumcari High School Band. A reception in honor of the graduates and their guests followed commencement.