Dr. Mildred Lovato, President of Mesalands, presented Mr. Ted Peabody, Member of the Mesalands Board of Trustees, with an honorary degree.

Mesalands Community College held their commencement ceremony on May 4, 2012 at the Tucumcari Convention Center and had over 500 attendees to the event. This year the College awarded a total of 109 two-year degrees and one-year certificates, compared to 92 last year. An honorary degree was also awarded at the commencement ceremony.

Mr. Ted Peabody, Member of the Mesalands Board of Trustees, was presented with an honorary degree during commencement.

“We are eternally grateful for all that Mr. Peabody has done to positively impact education and for all that we learn from him each and every day,” Dr. Mildred Lovato, President of Mesalands said. “Mr. Peabody is a proven leader, a hard worker, and is fair to all people. His wisdom, sense of fairness and goodwill, and the way in which he expresses his thoughts leaves such an indelible and meaningful mark. I, like many of you, are fortunate to have had that rare experience right here in Tucumcari.”

Mr. Peabody served in the U.S. Marines and fought in World War II. He received the Purple Heart while fighting in Okinawa. He studied at Texas Tech University and completed his Master’s Degree in Agriculture and Extension Education from New Mexico State University. He was later named full professor for that institution. He served 15 years as a Quay County Extension Agent. One of his greatest contributions has been his impact on the lives of young people. He worked with the youth through 4-H and in his church. He has shared in the growth of Mesalands with his support of the Mesalands Dinosaur Museum and the Wind Energy Technology Program. He has been a member of the Mesalands Board of Trustees since 2001.

“This is probably more of a surprise to me than it is to you. I appreciate this honor very much and I thank you,” Peabody said when he accepted his honorary degree.

This was also the first year Mesalands had a student speaker at commencement. Mr. David Huntzinger, was selected as the graduating class speaker.

“The College here has done a real good job. I think the most important aspect is that it really is a community college,” Huntzinger said. “I think this town will continue to improve in the future and this College will be the center of that change, that will enable it to do so.”

Huntzinger graduated with an Associate of Applied Science degree in Wind Energy Technology and previously earned a Bachelor of Arts degree in English from Rhodes College in Tennessee.

After graduation Huntzinger plans to move to Louisiana where he will either pursue a Master’s Degree in Business Management, or work in the field of Wind Energy Technology. 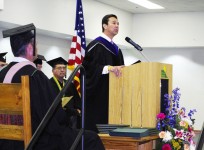 “Never be afraid to take informed risks. In fact, those that don’t take risks don’t create opportunities. The biggest risk in your life is the failure to take one. Failure is not a bad thing, as long as you make the effort to succeed,” Barela said. “Produce something of quality and value and make it a habit, because that’s what employers are looking for, a consistent habit of excellent work. Quality is not an act, it’s a habit.”

Barela ended his speech by encouraging the graduates to contact those individuals in their lives that helped them reach this accomplishment.

“This special day is what the college community looks forward to all year,” Dr. Lovato said. “A significant number of our graduates are first generation students. I commend you. Your job and your achievements have only just begun. Now, it is your responsibility to encourage, and support others to continue or start their journey to college, so the benchmark for achievement can be passed on.”