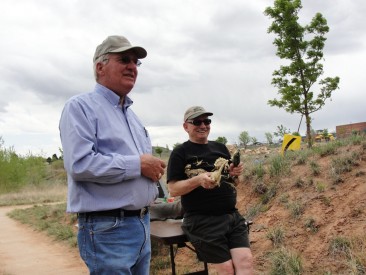 (Left) Craig Currell, past Director of the Mesalands Community College’s Dinosaur Museum and Natural Sciences Laboratory and Joe Cooper giving presentations to the children at the 2010 Earth Day at the outdoor classroom in Tucumcari.

The Mesalands Community College Foundation, Inc., is pleased to announce that they have established a scholarship in memory of Joe Cooper, for his continued support over the years for the College and the Mesalands Community College’s Dinosaur Museum and Natural Sciences Laboratory. This scholarship will ensure that Cooper and his caring spirit will always be remembered.

“Joe Cooper had a significant impact on the success of the Mesalands Community College’s Dinosaur Museum and Natural Science Laboratory, from inception to present day,” said Dr. Thomas W. Newsom, President of Mesalands. “This scholarship in memory of Joe Cooper, is just a small token of our appreciation for everything that he and his wife Marge have done in support of education.”

Cooper was a founding member of the Museum and purchased many fossils in Tucson, AZ. His monetary donations also greatly assisted in the inception of the Museum in 2000. In the Buy-A- Bone Campaign to raise funds for the Museum, Cooper purchased the ring finger of the Torvosaurus for an anniversary gift for his wife, Marge. He also sponsored a raptor exhibit at the Museum in honor of his parents, John and Vida Cooper. Cooper donated a large crystalized golden ammonite now on display at the Museum. Cooper also donated one of the oldest specimens in the Museum, a Trilobite that is approximately 500 million years old and is located in the Life Over Time exhibit. Cooper with the help of Craig Currell and Mike Lucero, created the C&L Repair Junkyard Dinosaurs located outside of Building C on campus.

Cooper was a member of the Mesalands Community College Foundation, Inc. He was also a charter member of Fossil Friends, the Museum’s volunteer and support program. Before he passed, he served as the Treasurer of Fossil Friends. He was a docent for the annual Elderhostel tours to the Museum. Cooper also volunteered many years with the Earthy Day event at the outdoor classroom for school-aged children.

“Joe Cooper was a very dear friend and I valued his friendship. He was always willing to help anytime that I called him, whether it was guest lecturing for a class, or whenever I needed a docent for the Elderhostel group. He was always available. He will really be missed. He was just an intricate part of this Museum,” said Gretchen Gürtler, Director of the Mesalands Community College’s Dinosaur Museum and Natural Sciences Laboratory.

Since his passing, Cooper’s family donated his collection of geology books and videos to the Mesalands Library.