Gonzales was a student at Tucumcari High School and a Dual Student at Mesalands. In October of this year, Gonzales lost his life in a tragic accident. Prior to his death, Gonzales had found a new interest in computers and in technology. This semester he was enrolled in CIS 101: Introduction to Computers, instructed by Michael Bilopavlovich at Mesalands. Following Gonzales’ death, the students approached Bilopavlovich with the idea of developing a memorial website celebrating his life. This website would also give them a platform to share their memories of Gonzales. Bilopavlovich agreed and made this new website their final project for the class. 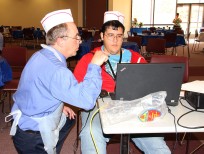 Caption. (left) Michael Bilopavlovich, Client Support Manager at Mesalands Community College and Josue Grajeda, student at Tucumcari High School and Dual Student at Mesalands, begin the preparation for the unveiling of the memorial website for Patrick Gonzales, during a special event at Mesalands last week.

Grajeda read one of the statements on the website that he thought best described Gonzales: “Patrick was always a happy guy. It was hard to make him angry and if you did it was kind of funny! This led him to be friends with almost everyone he met. He was an amazing guy!”

“I’m very proud of our students that took it on themselves to honor Pat through a website, that will allow us to remember him for years to come,” said Dr. Newsom.

Gonzales’ mother, Debbie Montano, was very emotional during last week’s event. She said she was very appreciative of the hard work the students devoted to this website.

“I was really touched. I know a lot of kids were affected by my son’s death. He was a good boy and he had a kind heart. He would have given the shirt off his back to help his fellow students and classmates, anyway he could,” Montano said. “I find it just phenomenal that they reciprocated and came together to create this beautiful website in his memory. I hope we can continue to grow the website to keep his memory alive.”