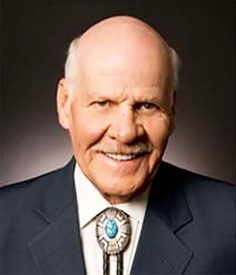 Mesalands Community College is pleased to announce that former State Senator Clinton D. Harden will deliver the commencement address at this year’s graduation ceremony. Sadie McAllister from Moriarty, NM, has been selected as the student speaker at graduation.

Senator Harden has had a successful career in both the public and private sectors. Harden was the State Senator for District Seven, which represents Quay, Union, Colfax and Harding counties; as well as parts of Curry, San Miguel, and Taos counties, from 2002 until 2012. This district covers over 15,000 square miles of rural Eastern and Northeastern New Mexico. The Senator and his wife Kathy of 48 years, have made rural New Mexico their home, and have lived in both Quay and Curry counties.

In 1994, Harden was appointed Cabinet Secretary of Labor by Governor Gary Johnson. In this capacity, he oversaw the implementation of the Workforce Development Act and was the Chairman of the Cabinet Council on Welfare Reform. During this time, Harden partnered with community colleges to establish the Truck Driving Certification Program in Chavez, Curry, and Quay counties, and oil field training programs in Lea and San Juan counties. He served as Cabinet Secretary of Labor for eight years.

Harden is now a government relations specialist and the owner of Clinton D. Harden & Associates of Clovis, NM, drawing on his past experience to counsel clients in rural New Mexico about the executive and legislative government process.

Commencement student speaker Sadie McAllister will be graduating with an Associate of Applied Science Degree in Agri-Business. McAllister completed a variety of general education and animal science college courses while attending Mesalands as a dual enrollment student at Moriarty High School. In high school, she was involved in 4-H and the Future Farmers of America (FFA) National Organization. Her dual enrollment courses have allowed her to earn her Mesalands degree in only one year, after receiving her high school diploma.

While a student at Mesalands, McAllister was named to the Vice President’s List in recognition of her outstanding academic achievement for the fall 2016 semester. She was also the Vice President of the Student Government Association. During her career at Mesalands, McAllister also had the opportunity to participate in hands-on research projects within the College’s Animal Science Program. She also works part-time as a New Mexico Master Dealer for Sullivan Show Supplies. In this position, she travels throughout New Mexico, attending county fairs and livestock events, and supplying livestock show participants with the products needed for the daily care of their animals. Following her graduation, McCallister plans to move back to Moriarty, and will begin working full-time at Sullivan Supply. She also wants to pursue an online bachelor’s degree in Agri-Business and plans to take over her family’s feed store business in Moriarty at some point in the future.

Mesalands Community College will hold their 2017 commencement ceremony on
Friday, May 5, 2017 at 6 pm at the Tucumcari High School Auditorium.