Researchers from Mesalands Community College and the division of Paleontology from the Museum of Texas Tech University, have described and named a new species of a crocodile-like phytosaur, Machaeroprosopus lottorum from the Upper Triassic period, near Post, TX. The skulls found are approximately 200 million years old, and one of the Machaeroprosopus lottorum skulls is arguably one of the best preserved phytosaur skulls ever found. These skulls have made a significant impact on the research of those phytosaurs, that lived before the extinction of the animals at the end of the Triassic Period. Research also provides evidence that some phytosaurs were sexually dimorphic.

The phytosaur skulls were found to be distinct from any phytosaur species known from Arizona, New Mexico, and Texas. The new species Machaeroprosopus lottorum is 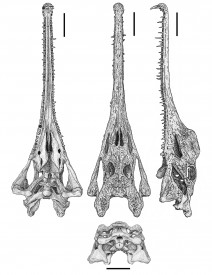 The best preserved skull of Machaeroprosopus lottorum is currently on display at the Museum of Texas Tech University.

characterized by the different features of the nostril and the almost closed temporal opening in the rear of the skull.

“One of the skulls found was among the best preserved phytosaur skulls, I’ve ever encountered. I’ve seen a lot of phytosaur skulls in the past 20 years. The preservation of this specimen is stunning, absolutely stunning. I doubt if you can find any other phytosaur that has such an informative brain case,” Dr. Axel Hungerbuehler, Faculty, Natural Sciences/Museum Curator at Mesalands Community College. “There is a wealth of anatomical information that was not available before discovering this specimen.”

The two skulls found also reinforced previous conclusions that some phytosaurs developed distinct male and female forms. The main difference between the genders was that males had a more robust snout with a high bony crest, whereas females had slender, cylindrical snouts.

The well-preserved skull of Machaeroprosopus lottorumis currently on display at the Museum of Texas Tech University.

“It is very exciting for Mesalands Community College to have a professional of Dr. Hungerbuehler’s caliber, in order to maintain our institution as one of the top colleges in our region in paleontological research,” said Dr. Thomas W. Newsom, President of Mesalands Community College. “As the leading community college in the U.S. in regards to paleontological undergraduate research, it is satisfying to know that Dr. Hungerbuehler and his staff are providing outstanding educational research opportunities for our students.”

Dr. Hungerbuehler stated that even though research of these specimens have led to important conclusions for the systematics of phytosaurs, this research is only the beginning. Dr. Hungerbuehler also said that his paleontology students this semester will start to analyze other phytosaur species of the Machaeroprosopus group, as a result of the findings made from the Machaeroprosopus lottorum.