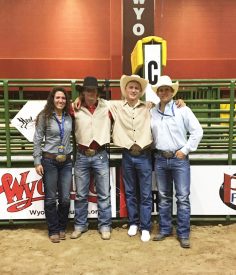 Wilcox started the college national finals on a high note, after being crowned the bull riding champion for the Grand Canyon Region in the year-end standings. Matt Hughes, Intercollegiate Rodeo Coach and Faculty Member at Mesalands Community College, explains how Wilcox performed at this year’s CNFR.

“Blue did everything just right on the second bull he rode. He was outstanding! You couldn’t ask for more than that,” said Coach Hughes. “He had some chute issues on his other two bulls. There were just some small mistakes that you can’t make on that caliber of animal.”

Coach Hughes says he believes Wilcox was beyond ready for the professional stock at the college finals. He does plan on working with Wilcox next season to clean-up some of his small mistakes to help his overall performance.

“Scotty’s mental game was good. He was excited to be there and was grateful for the opportunity. His main goal was to cover all three horses and he did that,” Coach Hughes said. “Next year, we will perfect his riding style a little more and help him score more points.”

Coach Hughes also stated he talked to Rebecca Darrup, from Mifflinburg, PA, who is also a member of the Mesalands Rodeo Team, at the college national finals. Darrup was a journalism intern for the CNFR. Coach Hughes said that Darrup had learned a lot and she was appreciative of the opportunity

“The college finals was a good starting point for the Mesalands Rodeo Team,” Coach Hughes said. “Our student athletes competed well and they showed they deserved to be there. Next year, I look forward to having an entire team at the college finals.”