Mesalands Community College is pleased to announce their 2012 Academic All-American recipients: Bailey Bates, from Mexican Springs, NM; Macy Fuller, from Clarkston, WA; Hayden Moore, from Clovis, NM;  and Fran Orozco-Marchand, from Omak, WA. This honor is bestowed to students that have a 3.5 cumulative grade point average (GPA) and qualified for the 2012 College National Finals Rodeo (CNFR) in Casper, WY.  There are 50 students in the nation that received this award. 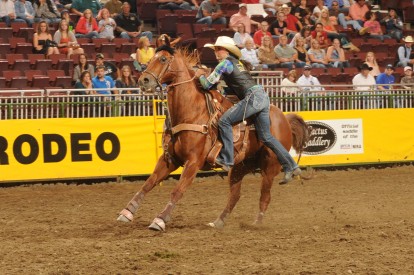 Photo courtesy of Dan Hubbell Photography. Macy Fuller at the 2012 College National Finals Rodeo in Casper, WY. Fuller was crowned CNFR Rookie of the Year and is a 2012 Academic All-American recipient.

Mesalands is leading the nation with 16 Academic All-Americans in the past five years.  Mesalands also had the most students this year to receive this award.

“It’s a pretty good feeling knowing that our students are doing well inside the arena and inside the classroom,” said C.J. Aragon, Mesalands Intercollegiate Rodeo Coach at Mesalands. “These students are taking care of business in all of aspects that we’re asking them to.”

The 2011-2012 Mesalands Rodeo Team did outstanding last year with a cumulative GPA of 3.21, while also qualifying ten students to nationals, the most ever in the program’s history. At the 2012 CNFR the Women’s Team finished in fourth place and Fuller was crowned CNFR Rookie of the Year. The Men’s Team finished 27th.

Fuller, Bates, and Moore, all three freshmen, are returning this fall to compete in rodeo at Mesalands. Orozco-Marchand, three-time Academic All-American, graduated in spring 2012 with an Associate’s Degree in Farrier Science.

“We are so proud of our Academic All-American students!” said Dr. Kennedy, Vice President of Student Services. “We have four this year, which is a testament to the Coach’s emphasis- not only on athletics, but academics and good citizenship. Our rodeo students well represent Mesalands, New Mexico, and the sport of Rodeo.”