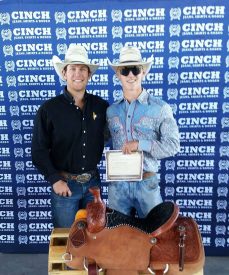 Roughstock riders Kenneth “Blue” Wilcox from Greenbrier, AR and Scott Bevins from Amsterdam, NY, will be representing the Mesalands Community College Rodeo Team in the biggest college rodeo competition of the year, the 2017 College National Finals Rodeo (CNFR). The college finals will be held at the Casper Events Center in Casper, WY,
June 9-17, 2017.

Wilcox is a sophomore at Mesalands Community College majoring in Artistic Silversmithing. As a student athlete at Mesalands, Wilcox has excelled academically and athletically. He was recently named to the Vice President’s List for the spring 2017 semester, recognizing his outstanding academic achievements. To qualify, students must maintain a grade point average of 3.5 or higher.

Newly hired Matt Hughes, Intercollegiate Rodeo Coach and Faculty Member at Mesalands, says he is ready for the upcoming CNFR.

“I am looking forward to being a head coach at this year’s college finals,” Coach Hughes said. “I’m excited for the two student athletes we are sending to the CNFR. I know they will compete at the best of their ability and they have a shot at the national title. I also look forward to next year, when our goal is to send a team to the college finals.”

Fellow teammate Rebecca Darrup, from Mifflinburg, PA, will also be joining the CNFR competitors in Casper, but in a different capacity. Darrup has been selected as a journalism intern for this major athletic event. Darrup is a sophomore at Mesalands majoring in Communications. Earlier this year, Darrup was named to the 2017 All-State New Mexico Academic Team. She was also a recipient of the 2016-2017 President’s Citation recognition and made the Vice President’s List for both the fall and spring semesters.

Darrup, Bevins, and Wilcox, will be competing on the Mesalands Rodeo Team for the 2017-18 season.