Last week Mesalands Community College had two performances of “Insomnia: A Dark and Stormy Night” by the M. Loren Kahn Puppet and Object Theatre from Albuquerque, NM. They have performed this show throughout the state, in Europe and in Canada. “Insomnia” is an adult targeted puppet show geared towards the awareness of insomnia. The performance uses humor to illustrate the minds of individuals who suffer from this sleep deprivation disorder. 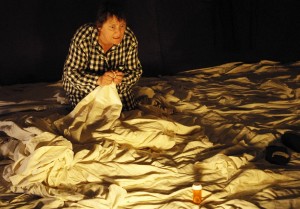 There were 60 attendees of both performances in the lecture hall at the North American Wind Research and Training Center. Mesalands students, staff, and community members were excited about the College offering more diverse and cultural programs.

“I just watched the performance of Insomnia here at Mesalands and I really enjoyed it,” Ryan Lujan, Student at Mesalands said. “It was extremely thought provoking and it was well performed and made me reflect upon things about humanity itself, which I really didn’t consider until I watched this play.”

Lujan said his favorite part of the show was the performance by Isabelle Kessler and how she was dealing with her thoughts, and how they were keeping her awake at night.

“It’s us, your little thoughts, your night buddies, your insomnia visitors, climbing on our carousel, up and down in uncertainty, a whole night ahead of us, together until the wee hours, when we have our moments of lucidity, as strong as a lightning bolt, and as a ephemeral….. hide and seek, try to catch us….” Kessler said during the performance.

The play was performed by Isabelle Kessler, Loren Kahn and Alex Knight.  The play was written by Loren Kahn and Isabelle Kessler, directed by Kevin Elder and Elsa Menendez, with original music by Gaspard Ledem. The program is in partnership with The National Hispanic Cultural Center and the Outpost Performance Space and is funded in part by Urban Enhancement Trust Fund of the City of Albuquerque.