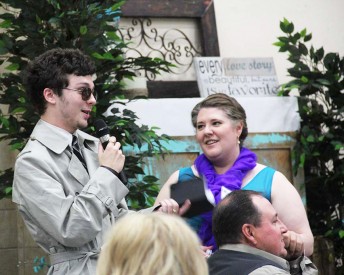 Amanda Hammer, Director of Business and Auxiliary Services, plays the maid of honor in the Til Death Do Us Part fundraiser and is questioned by the detective from the Murder Mystery Company, about her whereabouts when the murder happened. Hammer was the winner of the “Best Actress Award.”

The Mesalands Community College Foundation, Inc. recently hosted their ‘Til Death Do Us Part fundraiser at the North American Wind Research and Training Center. Attendees to the event had the opportunity to watch a wedding ceremony take place and then witness a murder. Preliminary net proceeds for the Mesalands Foundation are over $6,000, which will be used to support programs that benefit Mesalands Community College and their students.

“I think the event went over very well. It seemed like everyone was having a lot of fun. I’m really glad we had this event on campus again this year, to showcase the facilities and programs at Mesalands,” Streetman said. “I also want to commend our student volunteers from Phi Theta Kappa that helped with the event. They did an outstanding job!”

Nearly 200 tickets were sold to the ‘Til Death Do Us Part fundraiser. During the event, attendees enjoyed a shrimp boil dinner and traded clues, to identify the wedding murderer. There was also a live and silent auction that took place throughout the event. 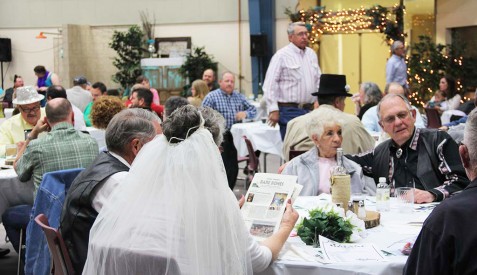 Attendees to the ‘Til Death Do Us Part fundraiser at the North American Wind Research and Training Center, socialize as they begin their quest to identify the murderer.