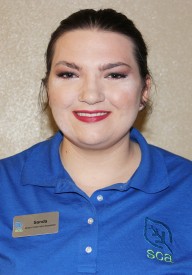 Mesalands Community College is pleased to announce that former student Sanda Garrett from Tucumcari, is a Public Safety Intern working with the U.S. Army Corps of Engineers (USACE) for the summer. As part of her internship responsibilities, last week Garrett gave a presentation on water safety at the Mesalands Community College’s Dinosaur Museum and Natural Sciences Laboratory, to parents and children involved in the Quay County Home Visiting Program.

Garrett’s four-month internship is through the Student Conservation Association (SCA). According to their website, SCA’s mission is to build the next generation of conservation leaders and inspire lifelong stewardship of the environment and communities by engaging young people in hands-on service to the land. As a Public Safety Intern, Garrett works closely with the park rangers from USACE to promote water and boating safety. She works at both the Conchas Lake State Park and the Santa Rosa Lake State Park.

“I really like the internship. It’s been really interesting and I’m getting a lot of experience,” Garrett said. “My main job is to promote public safety and specifically water safety. I give presentations on water safety and help with boat inspections. I also hand out a lot of water safety bags to children.”

Garrett started attending Mesalands Community College in the fall semester of 2012. She participated in multiple undergraduate research projects at Mesalands, including water research projects at Conchas Dam, in collaboration with USACE. She also presented the findings of the water research with Mesalands faculty members and fellow students at the following events: Community College Undergraduate Initiative Fall 2014 Colloquium in Charlotte, NC and the 2015 New Mexico Academy of Science Research Symposium in Albuquerque, NM.

“When I was a student at Mesalands we did water research and went to Conchas and took water samples with the Army Corps. So I had already been out there and been on a boat. I definitely think that was a good experience,” Garrett said. “It gave me a foot in the door when I applied for this internship. It looked really good on my resume.”

Garrett is currently a student at Eastern New Mexico University majoring in Graphic Design. She plans to graduate in December. 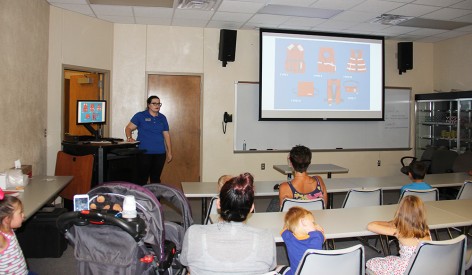