Summer Adventure Camp was held last week at Mesalands Community College.  This was a week-long camp of southwest themed classes that were both educational, as well as a fun experience for all ages. The campers learned hands-on techniques including, but not limited to, computer generated art, video and graphics editing, mural painting and dino digging.

“The week went great! The campers were busy from eight in the morning until five in the evening,” said Donna M. Garcia, the Director of Academic Affairs. “This week was the highlight of my year, it was phenomenal!”

The campers learned the art of mural painting from local artist, Doug Quarles. Campers completed the mural located behind Building A at the College and painted a new mural in the kids’ section at the Dinosaur Museum. They also participated in various activities involving dinosaurs in the Dino Digging class, where they took a field trip to hunt for fossils. In the Breyer Horse class, campers painted and produced clay models for a diorama. New computers classes were added this year that taught computer graphics and video editing. Campers created a short video documenting the week’s activities.

“The computer classes were awesome, I learned a lot!” said Joey Stines, 11, a youth camper in Summer Adventure Camp. “I can’t wait to show my big brother all that I’ve learned.”

The week ended with a barbeque for campers and their families, and a guided tour and lunch at Conchas Dam. After that, there was the reveal of the mural created by the campers in the kids’ section at the Dinosaur Museum. The night ended with the final class of the week, in which the youth campers slept with the dinosaurs until Sunday morning at the Museum.

“We are welcoming input from the community,” said Garcia. “We are already planning next year’s summer camp program and are looking forward to some great ideas.”

A special thanks to the New Mexico Art Space and Burns Lumber Company for the donation of supplies and classroom space. 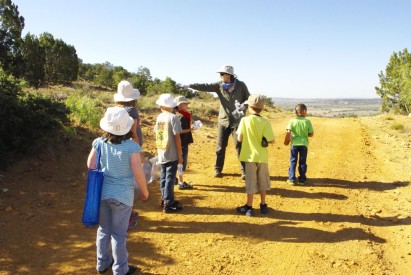 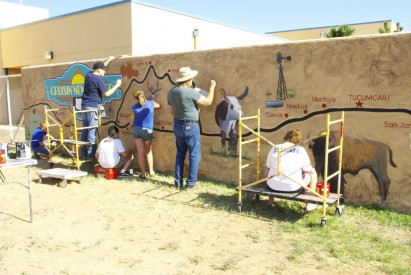 (Center) Doug Quarles, local artist and instructor of the mural painting class located behind Building A.